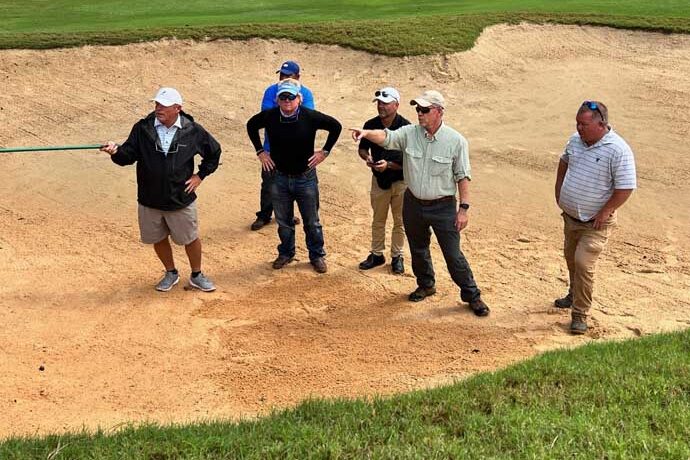 SYLACAUGA – FarmLinks at Pursell Farms, long considered a top-5 golf course in the state, now has pristine bunkers to complement the Michael Hurdzan/Dana Fry design that opened in 2002.

Architect Tripp Davis did the design work and Golf Sculptors International did the construction. Although less obvious, mowing lines were changed to provide better visual definition from the teeing areas.

The project included every bunker. Some were moved and others were eliminated. A major point of emphasis was drainage, and new technology will allow for faster recovery after rain.

Bunkers were reshaped and filled with Tour Angle pristine white sand. Edges were redefined and the slopes around them were softened to allow golfers to walk in and exit with more ease.

Bunker faces and other areas around the bunkers were sodded with Zorro Zoysia.

Robert Mitchell, the director of agronomy at Pursell Farms, said the project was a win-win deal for golfers and his staff.

“The impact of the bunker renovation is huge for our golfers and our team,” Mitchell said.

“It’s already proven itself to be a labor-saving model. The 80 to 100 man-hours we used to spend repairing bunker washouts after a rainstorm is reduced to about 30 with the improved liner and drainage.

“The new Zoysia grass faces also improve costs as we’re not edging or pulling runners as often. Tripp and his team softened the slopes on most of the bunkers, which reduced the fried egg lie, and golfers can now walk in and out more easily. Add this to the bunkers being playable faster after rain, and the guest experience is greatly improved. Everyone won.”

Davis said his goal for the new bunkers was simple.

“We were asked to design and oversee a bunker renovation to replace the old bunkers and make the bunkers as strategic and visually interesting as possible,” he told golfcoursearchitecture.net.

The end result accomplished that goal.

David Pursell, CEO and founder of FarmLinks at Pursell Farms, said every bunker now is a “masterpiece.”

“As a golf course owner, I’ve been able to see a project go from planning, to routing, to growing in, then to the final project. I enjoyed Tripp and Kyle’s [Downs, senior design associate] thought process and artistry in making sure the new bunkers were visibly appealing, very playable and easier to maintain.”

Pursell said the hands-on approach taken by Davis and Downs ensured a quality outcome for the project.

“They both made many trips to the farm to oversee construction, sometimes making improvements mid-stride,” Pursell said. “It has really upgraded the golf experience at FarmLinks, and I could not recommend them more.”

For more information about the course and its other amenities, visit FarmLinks.