Changes on the way at Cherokee Ridge, AU Club 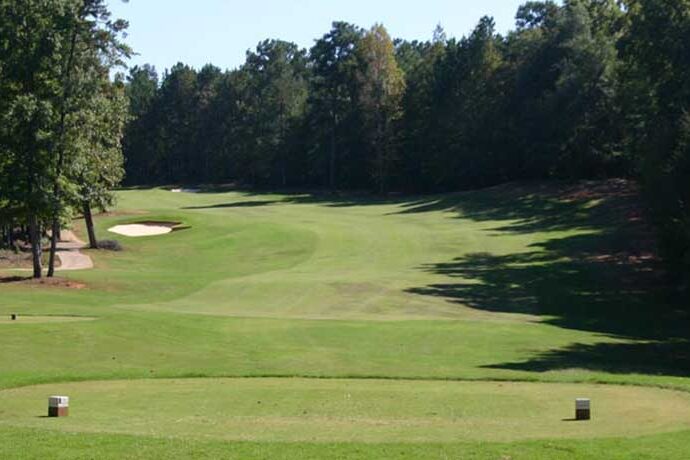 UNION GROVE – Some major changes are on the way at Cherokee Ridge Golf Course and the Auburn University Club.

Cherokee Ridge, a semiprivate 18-hole course just south of Huntsville, is converting its greens to TifEagle Bermuda grass. The AU Club course, a private facility in Auburn, is undergoing an extensive renovation under the direction of Bill Bergin.

Jimmy Green, a former Auburn University golfer and part of the ownership group of both courses, detailed the changes at both courses recently.

“Our whole goal with the AU Club is to build a club that can host big events – NCAA events, SEC events, PGA Tour-type events, and we have begun that process,” he said. “We were very fortunate to get the original designer – Bill Bergin – to come back and tweak the golf course a little.”

Changes at the AU Club include the addition of 12 bunkers and 13 tee boxes. Several greens were redesigned and a new greens complex was built on the ninth hole. Green estimated that between 1,500 and 2,000 trees were removed. Design work was also done on several fairways. Green said when the renovations are complete, the AU Club will stretch close to 8,000 yards from the tips.

“It’s not a totally different golf course but it’s some pretty major changes being done,” Green said. “Along with our staff and the coaches from Auburn University golf teams and their input, we are now able to put a golf course out that can attract any event they play.”

Green said the target for the AU Club course to reopen Oct. 1.

At Cherokee Ridge, the changes are all about the putting surfaces and converting them from bentgrass to TifEagle Bermuda grass. Work has already begun and the turnaround time is a surprising 6-7 weeks. Green said the new greens should be ready by the end of August, weather permitting.

The course remains open with temporary greens. Rates have been discounted because of the temporary greens, but Green said those who play now will be given a complementary greens fee to return once the new greens are ready.

“Bent grass is a great grass, and when it is in great shape and rolling 12-13 there is probably not a better putting surface. But in the South, it is so hard to groom and take care of. You are always fighting the heat,” Green said. “We struggled with some greens every year we have owned it.”

There were issues with two greens this year and Green said four others were struggling as well.

“At that point we just made the decision to go ahead and make the switch from bent to Bermuda,” he said.

After consulting with the USGA, Green said they chose TifEagle as the proper grass for the Cherokee Ridge greens.

A quick turnaround at Cherokee Ridge

“We asked the USGA if you are building a golf course anywhere in Alabama, what grass would you put on your greens and everyone said TifEagle,” Green said. “There are lots of great hybrids out there. TifEagle is probably the Cadillac of grasses of Bermuda for golf courses and that’s what we want to do at Cherokee Ridge. We want to put the best grass in so the members have the best playing facility not just for a few months, but for all 12 months.”

The quick turnaround for the greens at Cherokee Ridge is a result of doing a no-till process that is less invasive.

After spraying the greens to kill the bengtgrass, they are aerified and verticut in several different directions. Fertilizer and water is applied and sprigs are placed on top of the greens. A machine then splices the sprigs into the ground and the greens are top dressed and watered heavily for about 10 days.

Green said a similar process was used at the AU Club and within six days the grass had two inches of root growth.

“When it starts sprouting and growing, pretty much the entire green is coming in at that point,” Green said.

“When we sprigged the front side, I think we had about 40 members who came out and helped,” he said. “It was a fantastic sight to see – all of them getting involved.
There have been two personnel changes at Cherokee Ridge as well.

New general manager Peter Sands of Orlando will begin Aug. 1. New golf course superintendent Lester Lombard, originally from South Africa, has joined the staff.
Green said Lombard has been at three courses where the greens have been converted to TifEagle.

“We’re very excited to have him and we are excited about what is on the horizon at Cherokee Ridge,” Green said.

Green said the real estate market has been booming in the community with 40 new houses have been built in the past 18 months. Clearing ground for those houses has improved air flow around the course, he said.

Like the Auburn University Club, Green said he hopes to be able to attract some high-profile events to Cherokee Ridge. Previously, the course hosted what was then known as the Nike Tour.

He’d like to see something like a Korn Ferry Tour qualifier or secondary event come to Cherokee Ridge.

“It’s exciting,” he said. “We are excited to be a part of it and make it happen.
I think the members are really going to like it.”