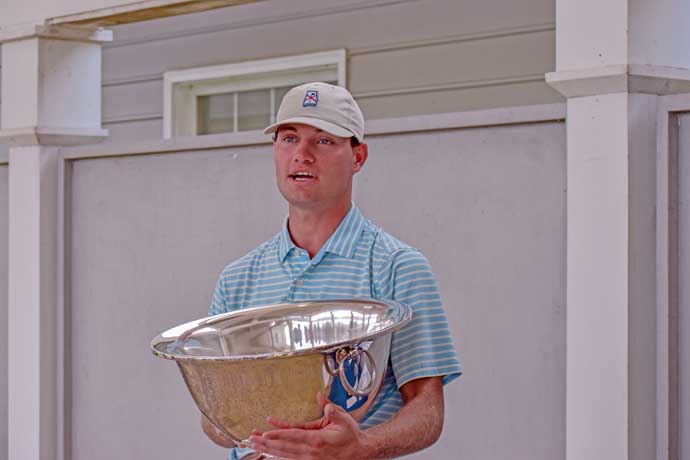 Connor Newton of Auburn birdied the second playoff hole to defeat Max Johnson to win the 106th Alabama State Amateur Champion. He fired a 13-under 271 overall to sit atop the leaderboard, posting 4-under 67 for the final round.

The tournament was played at Bent Brook Golf Course in Birmingham.

“Feels really, really good to be champion,” Connor Newton said. “I felt really good with my game, and I kind of felt like I was going to win it the whole tournament.”

Johnson of Lillian finished second, posting 13-under 271 for the Championship and 4-under 67 for the day.

Brantley Scott of Dothan posted 12-under 272 for the championship to claim third. He finished 3-under 68 for the day.

Molly Brown Davidson of Springville claimed the 59th Alabama Girls State Junior Championship title. Davidson was the only player under par for the championship, firing even-par 70 for the final round. She finished eight strokes ahead of her competition at one-under 209.

“So, it started kind of slow. As the day went on, I figured out my swing and putts started dropping,” said Davidson. “The rain delay got me to focus more when we went back out there. So, it was probably better for me to take that little break to clear my mind.”

Kate Ha of Auburn and Jinger Heath of Decatur tied for second place, posting 7-over 217. Ha posted an even-par 70, and Heath shot 2-over 72 in the final round.

Christine Chang of Auburn and Gabriella Nicastro of Huntsville finished 10-over 220 and tied for fourth place. Chang shot 71 and Nicastro 74 in the final round.

PrevPrevious ArticleHow Lee Trevino found his way to the PGA Tour
Next ArticleLIV Golf players: Remember who helped get you to the topNext