How Lee Trevino found his way to the PGA Tour 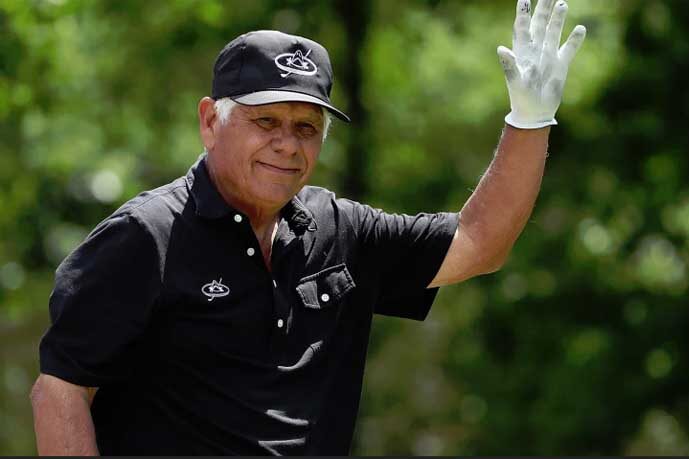 His route included a stop at an El Paso money game

It was either 1988 or 1989. I had ridden up from Washington, D.C., where I was working as a newspaper reporter, to play in a shotgun scramble sponsored by a Pittsburgh bar frequented by friends and family. I had bungeed my putter to the frame of my BMW road bike for the trip.

The putter was a bit of theatrical flourish for my Pittsburgh teammates, but I was running late. From the tee of the third hole, which bordered the parking lot, they saw me roll in and hollered to hurry it up. I hopped off the bike, grabbed the driver from a rental set my brother had gotten and banged off a drive, a worm burner. And off we went.

We had a grand time, with lots of yucks. During the luncheon, I hit the john. Coming out was a local, a good-looking middle-aged guy who was the spitting image of Lee Trevino. I said as much to him as we passed one another and he stopped dead, turned and stared me down as if I had just called him the N-word. Never in my wildest dreams would I have thought likening a guy to a six-time major winner would be an insult.

But this was rural southwestern Pennsylvania where to some, apparently, Super-Mex wasn’t so super.

Years later, as editor of Sun Country Golf, the statewide golf magazine in New Mexico, where I live now, I came to learn more about Lee Trevino, who had a unique and enduring connection to El Paso and New Mexico. In addition to his two U.S. Open wins, two British Open victories and two PGA championships — 29 PGA Tour wins overall — Lee Trevino had notched wins at the 1966 and 1972 New Mexico Open.

I later learned that Trevino donated his 1972 New Mexico Open winnings to the New Mexico chapter of the Southwest Section of the PGA of America. The money helped the New Mexico and El Paso County, Texas, pros defray the cost forming their own group — the Sun Country PGA Section. I thought that odd.

Soon, more tidbits about Trevino’s connection to New Mexico emerged. He was on hand for the 1979 opening of a course in Elephant Butte, N.M., and he designed one nine of the (now-defunct) 27-hole Rio Rancho (N.M.) Country Club outside of Albuquerque.

It wasn’t until I came to know one of my freelance writers at the magazine did I realize the full extent of Trevino’s connection to New Mexico and El Paso. Guy Wimberly, a longtime local pro who has since passed on, wrote a regular column for me.

In one, he explained the difference between a professional golfer and a golf professional. In another, he noted that in a regulation round, 36 of 72 strokes are presumed to be putts. “Which club should you be practicing with the most,” he asked our readers.

The Connection between Lee Trevino, El Paso and New Mexico

Wimberly, who was the dean of the Sun Country Section, had a knack for history and told the story of how a small group of guys in West Texas and Southern New Mexico helped Trevino get admitted to the PGA Tour.

In the 1960s, Trevino wasn’t yet the trailblazing Mexican-American icon he would become. He was an assistant working as a Dallas driving range whose chief duty was picking the range at night. His days were spent gambling on golf at a nearby Dallas muni.

Before long, his golf game led to his recruitment into a money game organized by local pros and El Paso and Las Cruces-area cotton and chile farmers. To be clear, this was no small-dollar game and the players were hardly muni hacks.

Former El Paso Country Club professional, Fred Hawkins, who had tied for second in the 1958 Masters and finished 6th in the 1952 U.S. Open, was in the game, as was Orville Moody, who was a soldier stationed at nearby Fort Bliss at the time. Moody would go on to win the 1969 U.S. Open.

One of the players, Martin Lettunich, who was tired of losing week after week, asked another player, Bobby Sparks, if he knew of anyone that could come to El Paso and be a good partner. “Sparks said, absolutely, speaking of a young ‘Mexican boy’ from Dallas,” Guy said.

Trevino, still working in Dallas, went to El Paso to join the game. Although he had once worked in a cotton field, when his mentors tried to pass their ringer off as a Mexican farm worker who drove a tractor, their cover story lasted about as long as it took Trevino to step up to the first tee.

Guy Wimberly estimated that “hundreds of thousands of dollars” were won and lost in that game.

An obstacle: Trevino’s boss wouldn’t write a letter or reference

Eschenbrenner, Herb Wimberly and others in the game suggested that Trevino had the game to make it on tour. The problem, however, was Trevino’s boss at the Dallas driving range. He wouldn’t write a letter of reference to the PGA of America — which ran the PGA Tour at the time — attesting to Trevino’s character.

It was a letter that Trevino needed to gain admission to the PGA Tour. And the answer from his boss was a firm no.

Whether it was racism or Trevino’s penchant for gambling that was behind the refusal is unclear. Locals only remember that the Dallas pro told anyone who asked that he didn’t think Trevino would make a good PGA professional.

To help Trevino, Eschenbrenner hired him as an outside services worker at Horizon Country Club in El Paso, which he ran at the time. At one point, Raymond Floyd, who would later win the Masters and PGA Championship, flew in for a money match that had been arranged at Horizon.

As Trevino unloaded Floyd’s bag, the PGA Tour pro asked Trevino who he’d be playing. “Me,” Trevino said. Super-Mex won the match and his legend began to grow.

In a months-long effort, Eschenbrenner, Herb Wimberly and a few others petitioned the PGA on Trevino’s behalf making the case for him to join the PGA Tour. After a lot of letter writing, some negotiations with the North Texas PGA Section and some bureaucratic smoke and mirrors, Lee Trevino was admitted to the PGA Tour.

The entirety of the story explained Trevino’s long-term affinity for New Mexico and El Paso.

To this day, pros in the region say that if Eschenbrenner, now a member of the Texas and PGA of America golf halls of fame, were to pick up the phone to ask Lee Trevino to get on a plane and play someone sight unseen, Super-Mex would be there.

So much has changed in golf since the bad old days when men like the El Paso driving range pro held sway, and even since the guy in Pennsylvania did his double take. Now and then, I still  get the the whiff – and occasionally a nose-full – of racism, even in New Mexico, a state where Hispanics settled almost 200 years before the American revolution.

But golf has indeed been making progress. And a money game in El Paso played a not-so-small role in that progress.

Dan Vukelich, a member of the Golf Writers Association of America and the Golf Travel Writers of America, is the online editor of Alabama Golf News. He lives in Albuquerque, N.M. (A version of this story originally appeared in Golf Chicago magazine.)