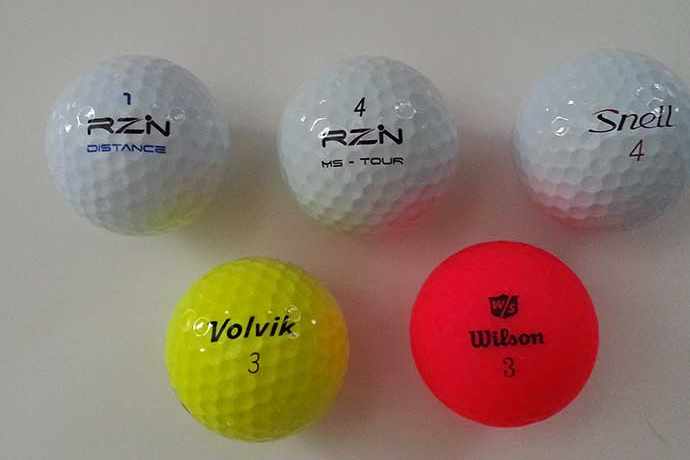 The weekend finally arrives, and with it comes expectations of a course record or at least a personal best score, so you break out a new sleeve of golf balls.

Supremely confident that today is the day it all comes together, you reach into your golf bag and grab one of those premium balls you see advertised by the top PGA Tour and LPGA Tour pros during the golf telecasts.

You peer down the first fairway, disregarding the fenced-in houses along the right and the pond on the left. You tee that $5 golf ball and let it fly – straight into the houses on the right.

No problem; everybody gets a breakfast ball, right? You tee up another of those expensive premium balls. Whack. Your perfect swing produces a smother hook that finds a watery grave.

Eighteen holes and six balls later, you finally hole out. Not only did you pay greens fees and a cart fee, gone are a half-dozen balls. That’s another $25 or so down the tubes.

It doesn’t have to be that way, you know. There are a ton of golf balls on the market today and most of them are available for about half the cost of those $50 premium balls. And you know what? Unless you are a highly skilled player, it probably doesn’t matter what golf ball you are playing. The golf ball you play probably won’t make much difference in your score at the end of the round.

In short, golf is expensive enough without running up an expensive tab keeping yourself supplied with golf balls.

Why Pay for Premium Golf Balls?

The fact is, most of us don’t have to play the name-brand golf balls. Unlike the guys on TV who tout those brands but haven’t paid for a sleeve since they were playing in the junior ranks, we simply aren’t that good. And there are plenty of lesser-expensive balls that will perform just as well. In recent years, brands such as Vice, Snell, Kirkland, RZN and Volvik have entered the competitive golf ball market that features commonly known brands such as Titleist, TaylorMade, Callaway and Bridgestone

“Honestly, when you get to a single-digit handicap you can start tinkering with the golf ball,” said Vaughn, who played collegiately at the University of North Alabama and also had a stint on what was then called the Nike Tour. “Even then, you still don’t need to be playing a high-end balls. When you get to a 5 (handicap) or below, that’s when you can really start to tell a difference. Most of it is going to be around the green.”

Will Wright, of GOLFTEC in Franklin, Tenn., said higher handicap players generally trend toward purchasing harder balls that tend to improve their distance.

“Generally speaking, if you are shooting in the 100s, you are probably losing a lot of golf balls,” Wright said. “So, it makes sense budget-wise to go buy a dozen balls for $15 versus buying a dozen balls for $45 because you know you are probably going to lose a lot of them when you are on the course. The better players want the more control, more spinny ball that costs them more. But in most cases, they aren’t losing a lot of balls per round.”

“People buy brands in cars and whatever else you want to apply that to,” he said. “Whenever you see the best players in the world playing a Titleist ProV1 or the new TaylorMade TP 5 ball, everybody steers in that direction because the pros are making every putt they look at, so it must be the ball versus their practice and putting stroke and the work they put in. Golf balls like Snell or Vice or even the Kirkland ball, they are all really good golf balls but don’t have the prestige or the brand of Titleist.”

Vaughan said Vice and Snell are two of the better less-expensive balls on the market.

Expensive Golf Balls May Not Be Right for You

“The Vice, to me, is a great golf ball and so is the Snell,” he said. “I know they are direct-to-consumer balls and you can’t get them in the shop, but they are wonderful. A lot of it is that people are in a hurry and they come into the shop and buy a dozen golf balls. If they would take their time and really research it, the Vice is a really good golf ball and you can find it for like $24.95 on the Internet.”

Vaughn said golfers should worry less about what golf ball they are playing.

“They should worry more about the components of their club, getting fit for clubs and find a PGA pro and take a lesson,” he said.

With that in mind, here are some brands you might not have heard of but that produce quality golf balls. For full disclosure, I’m an 8-handicap player with a slow-to-medium swing speed and have a high launch angle with my irons and driver. I have no certain golf ball that I play on a regular basis. One round might be played with Titleiest ProVs, another might be played a TaylorMade or Bridgestone, Snell, Volvik, RZN, Callaway, etc.

Volvik has steadily been making inroads on the pro tours and it is easy to see why.

The soft-rubber core of the Volvik XT Soft golf ball uses bismuth, a rare heavy metal. It’s used in the outer portion of the core to improve resiliency and promote better energy transfer. The three-piece ball features a urethane cover with a three-line alignment stamp to assist with putting. It received a Gold Medal rating from Golf Digest’s “Best New Golf Balls” equipment list for 2020 in the over $35 category.

My thoughts: I played the lime version Volvik Tour XT Soft for two rounds of tournament play and was more than pleased with the way the ball came off the clubface. The ball was actually a little longer than other premium balls when I caught it flush with my driver. It performed well on approach shots and it had decent spin on chip shots and bunker shots. It had a nice feel coming off the putter face, and the three lines makes it easier to line up putts. At under $40 per dozen, the Volvik Tour XT Soft is a good alternative to other Tour balls that are slightly more expensive.

This company originally produced Nike’s golf balls before the Swoosh got out of the equipment business. The RZN MS-Tour is a three-piece tour performance golf ball with soft urethane cover and 3D speed lock technology. Designed with state- of-the-art technology of the RZN brand, expect a soft and powerful tour ball targeted for medium swing speeds players.

My thoughts: Like the Volvik, the MS-Tour offered good distance with all my clubs and had a soft feel around the greens. It was easy to spin and had a good grab on chip shots. It had a nice, soft feel on putts, and also features alignment lines to make it easy to line up putts. It’s $29.95 price makes it an attractive alternative to those higher priced premium balls.

The RZN Distance is a three-piece golf ball with a resin core and high resilient ionomer cover manufactured with state-of-the-art technology of the RZN Brand. It’s designed to maximize distance with effortless swing while keeping a soft feel of the ball.

My thoughts: The ball is advertised as explosive distance on all long shots due to its powerful Resin Core formulation. I didn’t find it any longer than its MS-Tour companion, but it wasn’t any shorter either. It didn’t quite have the same feel as the MS-Tour ball, instead it had a little harder feel and didn’t spin as much on chip shots. With a $19.95 price point, the RZN is a good value for higher-handicap players.

Like the Titleist ProV1? This is basically the same ball because the guy who designed it – Dean Snell – was the man behind the Titleist ProV1. He also spent 18 years at TaylorMade developing different brands, so the man knows what he is doing. The Snell MTB Black has the same feel and performs on par with the well-known (and pricier) ProV1. It’s also priced at $32.99 per dozen.

My thoughts: I got a sleeve of Snell’s a few years back and really liked this ball. In a blind test, I doubt many people could tell the difference between it and a ProV1. It has a soft feel and really grabs on chip shots. At least for me, there was no appreciable gain or loss of distance.

The Wilson Duo Soft Optix is a two-piece 40 compression ball that comes in five different color patterns – orange, green, red, yellow and pink. This might be the softest ball you will ever play. You might or might not be a fan of the matte finish, but they are eye-catching. The Wilson Duo Soft Optix should provide a little extra yardage off the tee, as they are low spinning, low launch. The low spin rate will cost a little with the wedges, but it’s an easy adjustment to make.

My thoughts: I’ve been partial to Wilson Staff products – played Staff forged irons from 1976 until around 2005 – so I had high hopes for this ball and it didn’t disappoint. You can really feel the ball compress against the driver and the irons, and I did pick up a few extra yards with it off the tee and with my irons. It might not grab as much on the greens on chip shots, but with the extra four or five yards off the tee, that’s a fair trade-off. For about $19.99 a dozen, it’s a good value golf ball.

If you play frequently and are a good player, you know the premium balls provide consistent results and perform at a high level. For the majority of players who might be on a budget or looking for value, there are plenty of good, lesser expensive balls available. With lower price points, it’s not a bad idea to experiment with some of those brands. Try them, you might like them and the savings might mean over the course of a year you can sneak in a few more rounds.

If you have any questions, ask your local PGA of America professional.