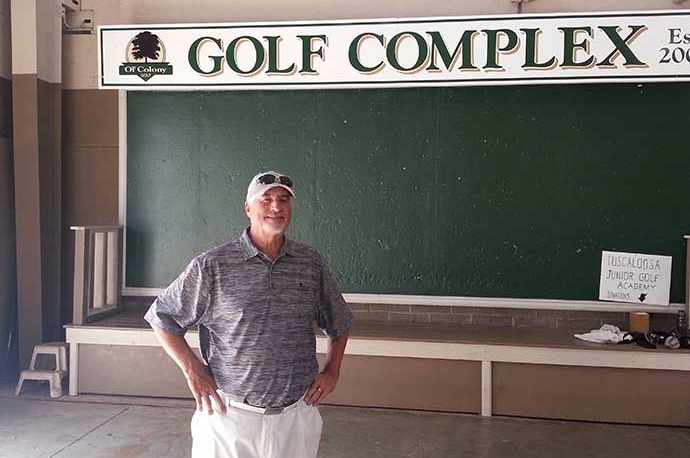 Lawrence Welk Has Nothing on Charlie Krenkel

Charlie Krenkel admittedly was tinkering with his game on Thursday, Sept. 17, 2020, – mark that day, will ya – at the Ol’ Colony Club in Tuscaloosa and he admits he wasn’t playing his best.

A PGA of America member who played the PGA Tour briefly in the early 1980s, Krenkel pulled an 8-iron for the rangefinder-measured 156-yard shot on the fourth hole (his 13th hole of the day) at Ol’ Colony. The shot started just to the right of the green, got a left-hand kick off a small knoll and rolled and rolled until it settled into the hole for his ninth career ace.

For those who know the hole, Krenkel pulled a 3-wood for his 236-yard blind second shot to the green and let it fly. When he pulled up greenside, the ball was nowhere to be seen. He looked in the bunker that flanks the green to the right. It wasn’t there.

He looked in the rough around the green. It wasn’t there. At first glance in the hole Krenkel didn’t see the ball, either. On his ace three holes earlier, the ball was visible because there was Styrofoam in the bottom of the cup.

Krenkel checked the hole one last time – there was no Styrofoam in the bottom – and indeed, the ball was nestled in the bottom of the cup for the rare albatross (double eagle). It was the first double eagle of his career.

The fivesome was playing from the white tees at Ol’ Colony, the home course of the University of Alabama men’s and women’s golf teams. From the white tees, the Jerry Pate design plays a 5,983 yards.

The Odds of Charlie Krenkel Making Those Shots

The listed odds for scoring a hole-in-one are 12,000 to 1, perhaps a little lower for a player of Krenkel’s expertise.

The odds of a player scoring a double eagle range anywhere from 1 million to 1 to 6 million to 1.

And Krenkel had achieved both in less than an hour.

A Google search turned up two previous occasions in which a player made an ace and an albatross in the same round. A junior golfer, Conor Kelly, did it on July 18, 2018, in Massachusetts, and Jim Dyar, of Mukelteo, Washington, also scored a hole-in-one and a double eagle in the same round on April 4, 2014.

And guess what? Krenkel is no flat-belly. He’s a 70-year-old who still gives lessons at Cherokee Ridge Golf Club in Union Grove just south of Huntsville.

Krenkel, who didn’t start playing golf until he was a junior in high school, said his first ace came in junior college while playing for the Jeff State golf team at what then was called Cullman Municipal Golf Course.

On his ace Thursday, he said: “It just trickled down the hill and gravity took over.”

Charlie Krenkel said he’s come close to making an albatross, but until No. 7 on Thursday, he’d never accomplished that feat.

“I couldn’t see the hole,” he said. “(John) came over and pointed at the tree tops where the green was. I hit it really good – probably the only really good shot I hit.”

Krenkel joked that he told Gafford that’s what having a good attitude on the course will do for a player.

There were a few other oddities about Krenkel’s good fortune.

First, it was 50/50 whether the group would play at Ol’ Colony due to expected rainfall from Hurricane Sally, which hit the Gulf Coast Wednesday. In fact, the group had another tee time booked for Cypress Lakes Golf Course in Muscle Shoals, about two hours north of Ol’ Colony just in case the it was raining in Tuscaloosa. But other than clouds and some breeze, it was a perfect day to play in Tuscaloosa.

Another oddity – just a few holes earlier the topic of a double eagle was discussed. Krenkel asked Gray if he had ever had made an albatross. Gray said he was half of one – he jarred a 6-iron for a double eagle after his partner hit the drive in a scramble.

“If you had to hit a ball good when you make a hole-in-one, there wouldn’t be a many of them,” Krenkel said. “I’ve seen a lot of balls that weren’t so perfect go in the hole. That’s what is so great about golf – you can be in your 70s and still be playing good golf, but you never know when you are going to hit one in the hole.”

Unofficially, Krenkel finished with a 73 and two more stories to tell the rest of his golf buddies.