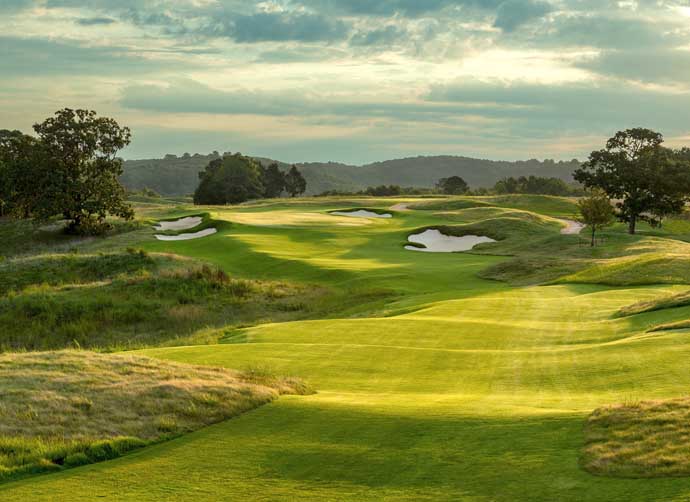 For years, Branson, Mo., seemingly had it all to attract out-of-town music fans. Now, it’s graduated into a top-shelf golf destination as well.

Your grandparents probably told you about the shows – music acts like Dolly Parton’s Stampede and comedy acts like Yakof Smirnoff, as wells as venues sporting familiar names such as Dick Clark, Mickey Gilley, Andy Williams and Jim Stafford.

Until recently, though, golf was a secondary entertainment option. Sure, it had a lineup of daily-fee courses, but nobody really went to Branson for the golf.

Well, that’s all changed, in large part, to the vision and financial commitment from Johnny Morris, CEO of Bass Pro Shops, whose Big Cedar Lodge is the new epicenter for golf in Branson.

Golf Portfolio in Branson has Expanded

And that’s just at Big Cedar Lodge. Among the other local courses available to visitors is Branson Hills Golf Club, an interesting Chuck Smith-Bobby Clampett collaboration with some outrageous green complexes.

Along with Big Cedar Lodge’s Ozarks National and Buffalo Ridge, Branson Hills and LedgeStone are four of the 10 courses ranked among the best in Missouri, according to Golfweek’s “America’s Best Courses You Can Play 2020.”

The opening in late September of Payne’s Valley, Tiger’s first design for public play, plus the recent addition of Ozarks National, will attract a new demographic to the area.

Branson previously got national golf exposure by hosting the Legends of Golf event. More recently, two of the Big Cedar Lodge courses – Buffalo Ridge and Ozarks National – hosted PGA Tour Champions events on back-to-back weeks. You might have heard of the guy who won at Ozarks National  Phil Mickelson – who smoked the field in his Champions  debut.

“Golf, to me, would be the fifth element for revenue,” said Kirk Elmquist, vice president for sports development for Branson.

“You now have championship golf tied into the four local courses that have been here for many years. Now you have newer ones that lift it up even more. You look at the lake, theaters, attractions, entertainment, dining and then lodging – those drive the tourism here. But golf has been a big lifter for sure.”

Elmquist estimates are that in 2019, 8.2 million people flew over Branson with golf clubs on their planes. If Branson can lure just a fraction of those people to its courses, Elmquist said, it would provide an influx of new tourism dollars to an already robust entertainment/vacation industry.

“We look at the demographics, we look at the buying patterns and the behavior patterns of people – this is a great stop-off place to fuel your plane, play 18 holes and head to the other coast and then do it again on your way back,” Elmquist said.

With Ozarks National opening to rave reviews in 2019 and the imminent opening of Tiger’s new Payne’s Valley, Elmquist is confident Branson has the golf to attract golfers to do just that.

Morris has been the driving force in making Branson a golf destination comparable to any in the country. With jaw-dropping terrain for golf that includes panoramic vistas of the surrounding countryside, Morris gave Coore-Crenshaw and Woods a blank canvas to design tough, demanding, interesting and fun courses. The best thing is that all of the courses are distinct and no two holes are alike.

Here’s a rundown on the golf available at Big Cedar Lodge:

Buffalo Ridge opened in 1999 as Branson Creek but has been renovated and rebranded. If you’re lucky, when you tee off on the first hole there is a good chance you will see some North American bison grazing in a pasture left of the fairway.

It features five sets of tees, ranging from the red markers (5,004 yards) to the Buffalo (7,036 yards). One thing all of the Big Cedar courses have in common is wide fairways and spacious greens, and Buffalo Ridge is no different.

The course has been rated the No. 1 Public Course in Missouri by Golf Magazine and Golf Digest has ranked it in the Top 10 Missouri Courses since 2001.

Ozarks National is another gem in the Coore/Crenshaw collection of courses. It opened in 2019 and was named the top new public course in the country by Golf Digest.

Built along a ridgeline, Ozarks National offers spectacular views and has an old-school links feel to it. From the tips, it measures 7,036 yards. From the red markers, it’s 5,025 yards. It features all of the Coore/Crenshaw design elements we’ve come to expect, including green complexes that are distinct and challenging. One of the best holes is No. 8, a par 3 that plays over a steep native area that features dramatic bunkering in the front, left and behind the green.

This summer, 13 holes of Payne’s Valley were open for preview play.  Woods was scheduled to officially open this high-end daily-fee course with a TV exhibition match on Sept. 22 that includes himself and Justin Thomas playing Rory McIlroy and Justin Rose.

Payne’s Valley is Woods’ tribute to the late Payne Stewart, who was a native of the Ozarks and U.S. Open champion who died in a plane crash in 1999, four months after he won the national championship at Pinehurst..

“Payne’s Valley is the first public golf course that I have designed. I couldn’t be prouder of how it turned out,” Woods told the Associated Press.

Top of the Rock is one of two short courses at the resort. Designed by Jack Nicklaus, Top of the Rock features nine outstanding par 3s ranging from 123 yards to 202 yards from the black tees.

As with Buffalo Ridge and Ozarks National, it’s hard not to get caught up in the views. Top of the Rock was included in the Legends of Golf, a PGA Tour Champions event, a first for professional golf.

Don’t let some of the shorter par 3s fool you, though. The Nicklaus touch is evident in the severe greenside bunkering, making club selection difficult. This isn’t a pitch-and-putt course.

Mountain Top is another short course with 13 holes and designed by Gary Player, who routed the course through some stunning rock formations dating back 300 million years.

Memorable holes include the second hole, a long uphill par 3 that features a heavily sloping two-tiered green. The finishing hole is a paltry 95 yards that plays longer, thanks to the uphill tee shot.

For officials like Elmquist, golf pairs nicely with the other entertainment options the area offers.

“You look at the lake, theaters, attractions, entertainment, dining and then lodging – those drive the tourism here. But golf has been a big lifter for sure,” he said. “With the outlets and the shopping and the good, fun attractions for kids, I think golf became kind of a dad thing over the years. Golf has dipped into every demographic and now. You bring in the championship golf and you get girls trips, bachelor or bachelorette trips. Husband and wife golf trips. You have every aspect of golf from amateur to professional here.”

Branson Hills: One Quality Track Not to Be Missed

Branson Hills is as tough as, if not tougher, than its Big Cedar Lodge counterparts.

The fairways are tighter and its expansive greens are severe with slopes, undulations and false fronts.

Dan Davis, the general manager at Branson Hills, says the new influx of high-end daily fee courses is helping, not hurting his business. His theory is that any new play helps the area, and with a fine course of his own to promote, Branson Hills will get its share of the spillover.

“Initially Big Cedar took away from play a little bit,” said Davis, who has been at Branson Hills since 2011. “More and more every year that goes by, it has enhanced it. We are pulling more people from across the country. It used to be that our main crowd was from Kansas City, St. Louis, Tulsa and Oklahoma City. With the addition of (Big Cedar Lodge’s golf courses), before Branson had a lot of shorter courses, and it was geared to seniors.”

“They are really promoting outdoor activities,” Davis said. “The average age of Branson is coming down, and on the golf front what Big Cedar is doing as far as national advertising and the attention they are getting with the tournaments they have and the quality of their courses being similar to this, it has really enhanced us. That’s why now we are starting to see our numbers tick back up. I think it will continue to do so.”

“I had never seen that before,” he said. “It’s starting to spread away from the two- to three-hour drives that we used to depend on. We are getting to further destinations now.”

As a tourist destination, Branson has plenty of lodging options. One of the best is the Hilton Branson Convention Center. It’s in the heart of downtown Branson, an easy walk from the shows and Branson Landing, a venue that features a wide variety of shops and restaurants.

The Hilton Branson Convention Center has 294 rooms, onsite dining and two bars, an indoor pool and an outdoor pool, a fitness center and other amenities. It also is just a short drive away from most of the area’s golf courses.

PrevPrevious ArticleAlabama Four-ball Winners: Komara, Harwick
Next ArticleCharlie Krenkel: an’ a 1 and a 2Next