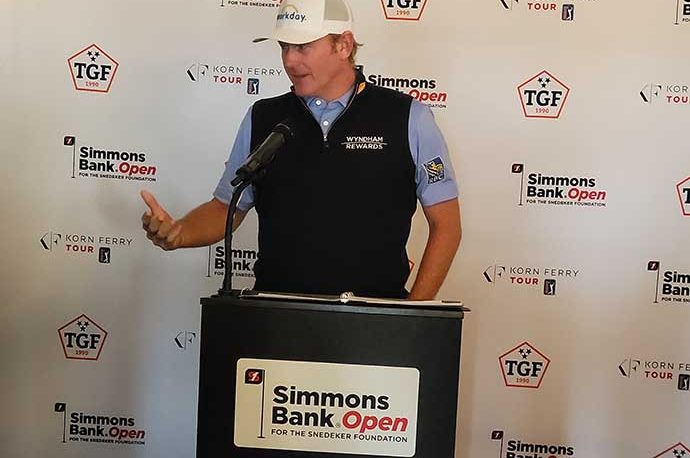 Brandt Snedeker, a nine-time Tour winner, said Wednesday in no uncertain terms he would never play on the start-up tour regardless of how much money might be dangled in front of him.

“I am very aware of what their history is – Saudi Arabia – and what they believe in and I don’t want any part of that,” Snedeker told alabamagolfnews.com during an appearance at a media event to promote the upcoming Simmons Bank Open Korn Ferry Tour stop at The Grove just south of Nashville.

The names of Shane Lowery, Lee Westwood and Adam Scott also have been attached to the it. The league will be affiliated with the Asian Tour and players will earn World Golf ranking points.

Brandt Snedeker didn’t hold back in his opposition to the new entity.

“Unfortunately, it has gotten some traction with some guys,” he said. “I am big-time against it. I don’t think it is good for the game of golf. Some guys seem to think it is.”
Snedeker urged those players contemplating moving on from the PGA Tour to make a well thought out decision.

“I hope the guys look at the long-term implications of making those kinds of decisions and not just making a decision for one year or two years,” he said. “It’s a life-altering decision if you want to go down that road.”

PGA Tour is where Brandt Sendeker wants to be

Turning his back on the PGA Tour, where the 41-year-old Snedeker has thrived since joining it in 2007 , isn’t in his plans.

“The PGA Tour has been great to me,” he said. “It has given me a platform and career I wouldn’t have had without them. I will always be indebted to them and feel like the game of golf is a better place with them involved.”

Snedeker said he also has been cautious with whom he has aligned himself throughout his career. He said he wants to be associated with organizations that reflect similar values to his own.

“I have been very strategic in my career and my life with who I have aligned myself with,” he said. “That’s why I rely on Simmons Bank – they are quality people and great people to be involved with.”

“They are great organizations run by great people. I have been very intentional about that,” he said.

Previously known as the Nashville Golf Open, the Simmons Bank Open benefits the Snedeker Foundation, which supports numerous charities throughout the region. On Wednesday, Snedeker received a check for $250,000 for the foundation from last year’s event.

Snedeker said he respects the right of players to pick and choose where and when they play, noting they are independent contractors. However, players who leave for the Super Golf League will lose their PGA playing privileges and would only be eligible to compete in major championships.

“I can’t speak to what (Mickelson) is thinking or why he wants to go down that road or the details of what they are talking about, but personally for me, the Tour has been great for me,” Snedeker said. “I can’t think of a better life to live and chase my dreams on the PGA Tour. I don’t want to think about going anywhere else. This is home for me and always will be.”

On Wednesday, Tiger Woods joined a growing number of Tour stars who said they will not be leaving for the new league. Rory McIlroy, Jon Rahm and Collin Morikawa have denounced the new venture.

Alan Shipnuck of the Firepit Collective reported Wednesday that an agent for one Tour player told him that when the new league has 20 confirmed members and would make a formal announcement. He said it has reached that threshold and could make an announcement during the week of The Players Championship, March 8-13.

Snedeker said it’s time for the issue of the new tour to be resolved. “It’s a very real thing right now and guys are talking about it and wanting to know what’s going on,” he said. “We’ll have a resolution on it I’m guessing in the next couple of months one way or another.

“It’s at the point now where if guys are gonna go, they need to go,” he continued. “Players that don’t want to go need to come out and say they aren’t going. It’s getting to the point where it is becoming too much of a distraction for everybody involved. Guys need to make a decision – leave or stay. We don’t care – do what you need to do.”