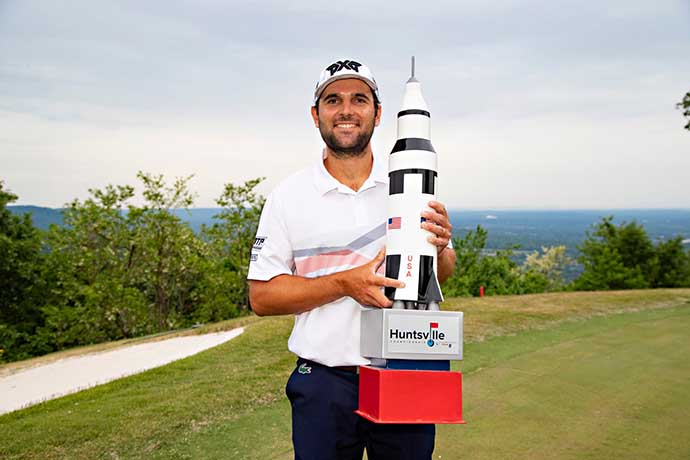 Close so often this season, the former TCU golf team member from Dumbea, New Caledonia, broke through Sunday afternoon at the Huntsville Championship with an eagle on the third playoff hole. New Caledonia is a French protectorate about 750 miles east of Australia

Barjon had the lead heading into the final round after fashioning a 64 In the third round, but he left the door open with a final-round 69.

Hard-charging Billy Kennerly shot 63 and Mito Pereira shot 66 to force a three-hole playoff after the three tied at 15-under-par 265 on The Ledges.

Kennerly bowed out with a bogey on the second playoff hole before the 28-year-old Barjon knocked in a 15-foot eagle putt on the third playoff hole.

Barjon took home $108,000 for the victory and is projected to move to sixth on the season points list, a jump of nine places.

Huntsville Championship is Pro Golf’s First for City Since 1998

Although it is his first Korn Ferry Tour win, Barjon won twice on the Mackenzie Tour – the most recent in 2019 – and he has been close to winning this season with three second-place ties and a third-place tie.

One of his second-place ties came in the WinCo Foods Portland Open, a tournament won by Lee Hodges, who lives just down the road from Huntsville.

Hodges came into the tournament hoping to put on a show as the local favorite, but he never got any momentum going and his closing 65 left him tied for 41st place at 2-under 278.

Another local player, Conner Godsey from nearby Rogersville, missed the cut after Monday qualifying.

Other players with ties to Alabama who made the cut included Davis Riley, who finished fifth after closing with a 67 to end the tournament at 267.