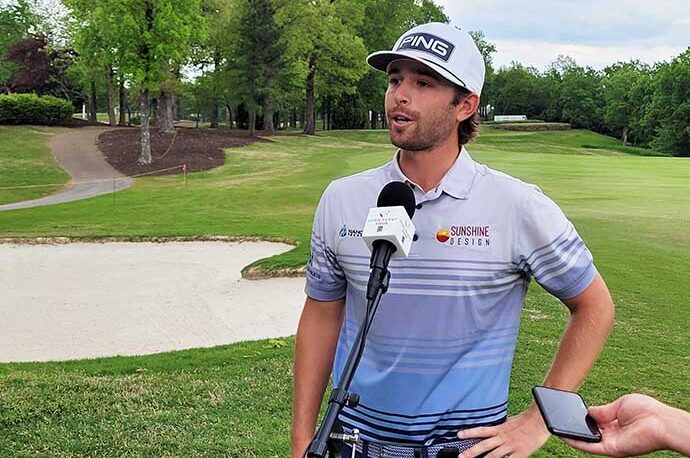 Heads into Sunday with a comfortable lead

Endycott, of Sydney, Australia, shot a bogey-free 6-under 64 to pull away from the field as he seeks his first Korn Ferry Tour victory. At 16-under-par 194, he leads Ben Taylor (64) by five shots and Quade Cummins (64) by six shots.

Second-round leader Erik Barnes shot 73 in the third round and fell seven shots off the pace.

“I hit it great – one of the best ball-striking days I have had in a long time,” the 25-year-old Endycott said. “I felt like I was hitting the center of the face. I was hitting my numbers.”

It’s Endycott’s first time to hold a lead after three rounds as a professional.

Harrison Endycott: Career has been ‘frustrating’

“My pro career has been pretty frustrating,” he said. “It’s nice to have a lead going into tomorrow, but I have a lot of hard work ahead of me. Guys out here are really good and I am expecting someone to shoot a low one. I am prepared for that.”

Harrison Endycott said he won’t be focused on the lead or the rest of the field. He’ll just try to play his game and try to win.

It’s been a frustrating season for Endycott, who is 103rd on the Korn Ferry points list.

The top 25 on the list at the end of the season earn their PGA Tour cards. If he can hold on, he’ll jump to 13th in the standings.

“I felt like I have played close to how I have played this week,” he said. “It’s very hard to keep optimistic about that because I know you have to focus on the process, but results kind of hit you in the face a little bit.”

His best finish this season is T19 in the Bahamas. But with one more good round, Endycott’s frustration will come to a quick end.