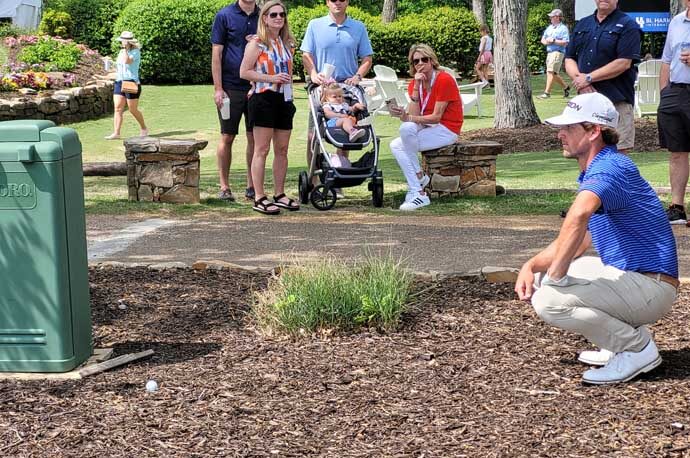 HUNTSVILLE – Sponsor exemptions are not easy to acquire on the Korn Ferry Tour.

For the Huntsville Championship there were five awarded– two unrestricted, two restricted and one given by the Korn Ferry Tour.

Former University of Alabama golfer Wilson Furr, who is in his first year playing professionally, received one of two unrestricted exemptions. Those go to whomever the tournament sponsor wants.

For Wilson Furr, who has playing status on PGA Tour Canada, getting an exemption meant having to write a letter to tournament officials detailing why he wanted to be included in the field.

The Birmingham resident made the most of his exemption, too, with a 31st-place finish courtesy of rounds of 67-69-68-73.

“Sponsors invites, you write in and try to sell yourself,” he said after Saturday’s round. “I’ve been playing well. I have full status on Canada. I feel like my game has made some turns in the last six months.

“I’ve played good in some events and tried to sell myself to the tournament director and thank goodness he believed in me to put me in the field,” he continued. “It’s out of our power and I was really fortunate to get in this week.”

Furr has no status on the Korn Ferry Tour. The only other way to get into an event is by Monday qualifying. He said he requests a sponsor exemption mostly to local events.

“The local ones will do more – obviously I am not going to write to Utah unless something like this,” he said. “I’m from Birmingham and I felt like I had a chance and sure enough I got in.”

Although Furr is a rookie, he said there is a certain comfort level playing on Tour. He already knows many of the players he is competing against from his days in junior golf.

“It was, to be honest, refreshing,” he said. “When I was 15, I got into the invitationals on the AJGA and everyone out here is who I played against. I’m staying with Carl Yuan this week and he’s No. 1 in the ranking. Once I got here and saw some of my friends, I was kinda like. this is the AJGA invitationals. It put me a little bit at ease. My game plan for the week was to just go play my game.”

Since graduating from Alabama, Furr has started working with Mark Blackburn and Layne Savoie at Greystone Golf and Country Club in Birmingham. The goal was to improve his wedge play and his putting.

Furr said his issues with his wedges date back to college. He said the issue was that he flipped his hands through the ball and that resulted in pulling his shots left.

“I knew something technically wrong because I couldn’t hit them,” he said. “It was clear that these guys were pretty good at it, so I was open to changing. I trusted Mark and Layne. They have worked together for a long time. They explained it to me thoroughly, and once they explained to me that this is why this happens and once I got the understanding of it, I believed in it.”

The fix came down to eliminating flipping his hands through the ball and getting more shaft lean, Furr said.

“When you do that and there is that much loft, it goes left and I did that all through college,” he said. “The biggest change was getting more shaft lean through the ball and keeping it, and once I did that it cleaned up tremendously.”

Furr also has been working hard on his putting stroke.

“I feel like I have to clean my putting up a lot,” he said. “I have to take the careless misses out and throw in a few extra makes here and there. I saw a putting coach about three months ago and he got me on a better path, so I know what my misses are. When I do I know the reason why.”

Furr was disappointed with his closing 73 that dropped him out of the top 25, but left knowing that he is capable of competing on the Korn Ferry Tour.