A Cinderella Story at the Huntsville Championship 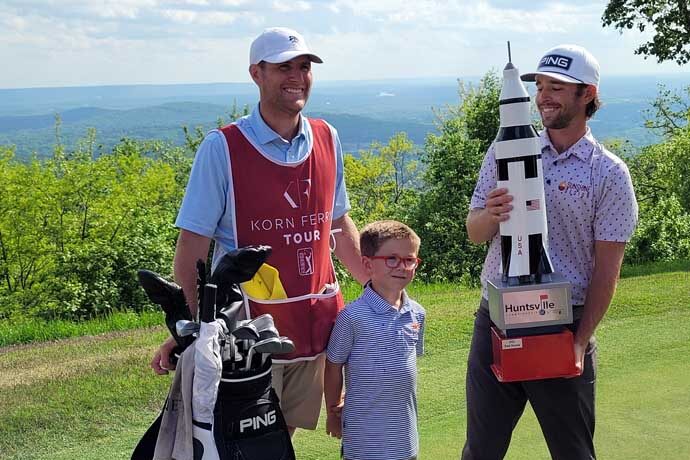 Brad Story steps up to caddie for winner Harrison Endycott

HUNTSVILLE – Harrison Endycott came to the Huntsville Championship without a professional victory and without a caddie.

He picked up Brad Story, the director of golf at nearby Huntsville Country Club, as his caddie for the week and on Sunday he celebrated his first victory.

As the week wore on and Endycott’s birdie putts kept dropping, Story, his caddie, became a big part of the story. After Endycott birdied the final hole Sunday to secure a five-shot victory over Brad Taylor at The Ledges, Story was on the receiving end of nearly as many congratulations as the winner.

Needless to say, it was a whirlwind week for Huntsville County Club’s director of golf. He was asked to caddie by Rob Clark, The Ledges director of golf, who was charge of getting caddies for the Korn Ferry Tour players who request one.

“Rob Clark is a really good friend of mine and he asked me if I would help,” Story said shortly after Endycott dropped home the final putt. “He asked me if I wanted a guy who would miss the cut or a guy who is pretty good. I said if I am going to carry the bag, he better be good. So, it worked out great.”

Endycott and Story began to bond during Tuesday’s practice round, but it wasn’t until the first hole of the tournament that cemented Endycott’s trust in his one-week caddie. Endycott stroked a birdie putt that didn’t go in and Story made a quick comment to the 25-year-old Australian.

“I think he kind of just misread the putt,” Story said. “I told him walking across the road that the putt didn’t break as much as he thought. On the second hole I read a long putt for him and he made it from about 40 feet – a super hard putt – and it was on from there.”

That read proved to be validation to Endycott that Story knew his stuff.

“He would read the putt and ask me what I thought and we would kind of go back and forth until he felt comfortable,” Story said.

“Brad was great,” Endycott said. “Just little things. Like we made a lot of putts this week, too, that I read the opposite and he said, no, it’s going to go this way, and I trusted him and made the putts. Brad seriously, seriously did a great job. I’m super thankful of him. He worked so hard for me this week and he just worked smart, too.”

Endycott went on to shoot 7-under 63 in the first round, including 30 on the back nine. He built a six-shot lead after three rounds and coasted home Sunday, even though the lead got as little as three shots early on the back nine.

Brad Story had a hard time remembering the last time he caddied, noting that it probably was when he was in college.

A job offer for next week in Nashville

“It’s been a minute, that’s for sure,” he said. “I didn’t really get nervous today until about No. 4 or No. 5. After that it was just sort of smooth sailing. He would have had to shoot a high number today to lose. We both knew that and we didn’t talk about it. We just said let’s go out and play golf.”

Endycott has been without a full-time caddie recently. A friend was on his bag but is now back in Scottsdale, Arizona, looking at some career opportunities other than as a caddie.

“I want him to come out and work for me but I want him to be happy and get the best out of what he wants to do,” Endycott said, “I’m trying to give him that proper space. Kind of in that position right now where I am super happy with what I am doing.  A local caddie worked great this week so maybe I’ll keep rolling it on. We’ll see.”

During the post-tournament celebration, Endycott loudly told Story he had a job waiting for him this week at the Simmons Bank Open in Nashville if he wanted.

“I would like to get to you work for me next week, mate, but I don’t know. I don’t know if you can get out of work,” he said.

Story, who earlier secured the 18th hole flag for his player, just grinned. He also wasn’t sure what his week lugging around Endycott’s bag would pay. But it didn’t seem to matter.

“It was a nice walk this week,” he said.