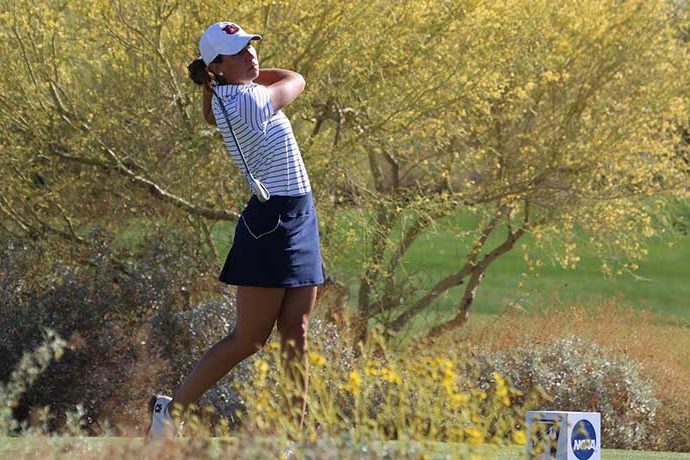 A day after they made a frenzied run up the leaderboard to qualify for the match play portion of the NCAA Women’s Championship, the Auburn Tigers women’s golf team couldn’t sustain the magic.

Third-seeded Oklahoma State eliminated sixth-seed Auburn in the quarterfinals with a 4-1 victory. The Cowboys also won their semifinal match to reach the championship against Ole Miss.

Auburn’s loss came a day after the Auburn Tigers women’s golf team moved from outside the cutline to a sixth-place finish in the stroke-play portion of the tournament, shooting 10-under to leapfrog their way into match play.

“This was a tough loss, and we acknowledged the disappointment after the match,” head coach Melissa Luellen told auburntigers.com. “I told them how proud I am of them, their fight, their love for each other and their love for Auburn.”

Before the final-round rally, Auburn moved up six places in the third round to get inside the 36-hole cutline at the tournament which was played at Grayhawk Golf Club in Scottsdale, Arizona. The NCAA Division I men’s championship also will be played at Grayhawk.

“This team has amazing heart,” Luellen said. “To dig that deep to get into the top eight was an amazing feat. This group just loves Auburn, and I am so proud of how they represent our school.”

Elena Hualde Zúñiga won the only match for Auburn against Oklahoma State. The fifth-year senior won 2-up over OSU’s Maddison Hinson-Tolchard.

The other Tigers weren’t as fortunate, losing tightly contested matches in the other four matches.

For the coming year, Auburn loses Hualde Zuniga, but Telfer, O’Berry and Julie McCarthy will utilize the extra year granted by the NCAA and come back for a fifth season.

“I think our future is definitely bright as we have a very competitive group that just doesn’t like to lose,” Luellen said. “We’re excited for what’s to come for Auburn women’s golf.”