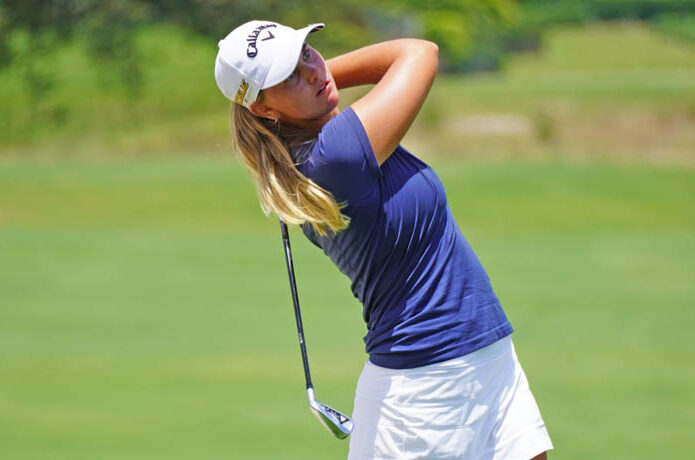 Coach Mic Potter signed prep standouts Harriet Lockley and Kaitlyn Schroeder to National Letters of Intent to continue their careers at the University of Alabama.

Potter expects both players to have a quick impact when they arrive in the fall of 2023.

Lockley, of the Millfield School in Somerset, England, is a Wales National Junior Team member who placed seventh at the 2022 European Championships while helping Wales to an eighth-place finish in the team competition. She also shot 66 to win an Open qualifier.

“We first saw her play at the 2019 British Girls Championship, and I could tell by the way she played and carried herself that she would be a good fit for our program and culture,” Potter said. “Harriet has gone on to be one of the top juniors, not only in Great Britain and Ireland, but in the whole of Europe. She has a wealth of experience in International competitions. We can’t wait for her to bring that experience to Tuscaloosa.”

Schroeder is from Jacksonville, Florida, and is home schooled. She will enroll in January. She is a three-time AJGA All-American and the top-ranked junior in the 2023 class according the AJGA.

Among her 2022 victories were the Rolex Junior and Girls Junior PGA Championship.

“Her ability to close in major tournaments will be an invaluable asset to our team.” Potter said. “It was clear from the beginning of the recruiting process that Kaitlyn was a perfect fit for our program. The addition of Kaitlyn to our golf program will be a game-changer for us but having her as a member of the Crimson Tide community will make

Auburn signed Ami Gianchandani as a graduate transfer for the 2023-24 season, coach Melissa Luellen announced. Gianchandani has spent the last three seasons playing at Yale University where she serves as a team captain.

“Ami has really developed during her time at Yale and is very serious about playing golf at the next level,” Luellen said. “I think that she will immediately be a leader on our team. She’s extremely smart, works hard and we are excited to have her at Auburn.”

Gianchandani has also served on the NCAA Student-Athlete Advisory Committee since 2020 and co-founded Accel Golf, a golf statistics app, in March of 2021.

She plans to graduate from Yale in May of 2023 and join the Auburn golf team for the fall 2023 season.

First-year coach Robbie Fields didn’t have to look far for his first signee, securing a National Letter of Intent from Hartselle’s Jinger Heath.

“This is a very special signing for me,” Fields said. “Not only because it is my first as a head coach, but also because I have known Jinger most of her life and have gotten to see her grow up from a little girl riding around on a golf cart into a very impressive young golfer. She’s had a strong junior career as a result of her work ethic which is one of the many reasons I’m excited to have her join our family.”

Heath, a senior at Hartselle High School and native of Decatur, is currently ranked No. 2 in Alabama’s class of 2023 by the Junior Golf Scoreboard. Her brother, Ryley, is a member of the Gamecock men’s team.

Fields, also a graduate of Hartselle, lands an established player from the prep and junior ranks to add to his roster. Heath will join a team that is only scheduled to lose one senior at season’s end and has no one else older than a sophomore currently on the team.