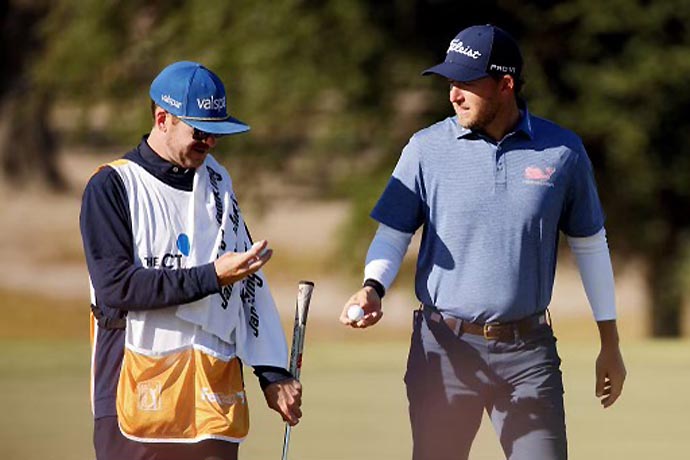 Hodges, Medley team up for success on PGA Tour

Ardmore and Athens, a pair of small north Alabama towns, are separated only by about 16 miles of a lonesome stretch of Interstate 65, a highway that runs north-south from Indiana all the way to the Gulf of Mexico.

Ardmore is just a speck on the map straddling the Alabama/Tennessee border. A person can cross the street and be in Tennessee. Turn around and walk back to the other side and you’re back in Alabama. Southern Gayles is the closest golf course. It’s one of those public courses that attracts a wide spectrum of players.

A little bit to the south, Athens sits on a main crossroad along the interstate corridor. It’s not big by any means, but it is growing as the expanse known as Huntsville/Madison creeps closer to the Limestone County line. Canebrake Golf Club is the country club of choice in town with its terrific junior golf program, excellent teachers and a robust membership.

Because of their proximity, it’s not uncommon for folks in the two communities to either be related, know one another through their children’s youth league or high school teams, or know somebody down the road through somebody else.

In a roundabout way, Canebrake Golf Club is the common ground between Ardmore and Athens that led to Andrew Medley becoming the caddie for Lee Hodges on the PGA Tour.

Medley, now 38, is from Athens. He was a Canebrake guy growing up. He had a standout junior career and played at Auburn as a teammate of  current PGA Tour pro Patton Kizzire. He later had a brief pro career that included a stint on the Korn Ferry Tour that ended due to a series of injuries.

Hodges, 26, is from Ardmore, and while Southern Gayles wasn’t far from his home, he eventually became a Canebrake guy, too. He honed his game and turned into a rising star there. Unlike Medley, Hodges’s college journey began at Alabama-Birmingham and ended at the University of Alabama.

After “retiring” from competitive golf, Medley found caddying a way to stay in the game. His first bag was with fellow Auburn alum Dominic Bozelli and his second was with Jimmy Walker.

It didn’t take Hodges long to make his mark in professional golf. He won early on the Korn Ferry Tour and graduated to the big tour, where he qualified for the FedEx playoffs in just his first season. Earlier  this year, he felt the need to break up with his caddie, Robbie Peeler.

The next man on Hodges’s bag turned out to be Medley, thanks mostly to their Canebrake connections. Although they didn’t know each other, they knew “of” each other through Medley’s younger brother James, who often played with Hodges in high school at Canebrake.

“I didn’t really know Andrew that well growing up, but his brother James and I were best friends and we played a lot of golf together because he lived at Canebrake,” Hodges said. “We played pretty much every day together in high school and junior golf.”

Hodges said he knew Andrew’s reputation was that of “an unreal player” and looked up to him.

“I knew he was a special talent – until he hurt his shoulder,” Hodges said.

A Change of caddies

When Hodges decided to change caddies, Medley was his first choice. Familiarity played a role, but Hodges said Medley’s reputation as a caddie was why he wanted him on the bag.

“I knew I kind of wanted Andrew because we had a lot in common and we could go do something special,” he said. “I know the way he caddies, and he is pretty intense and meticulous about the way he goes about things. That’s kind of how I am. I knew it would be a pretty good partnership.”

“It has come full circle for me where I am caddying for him and he is out there playing with Patton now,” Andrew said. “It kind of gives me reassurance in that this is what is supposed to be going on.”

As Hodges navigates the early days of his PGA Tour career, the burden is on Medley to guide him through new courses and new experiences. Medley is confident he can do that, thanks to his stints with Bozelli and Walker, which offered two distinct experiences.

With Bozelli, it was more of a partnership, Medley said. “It was more of a mutual working together, like a 50/50 deal,” he said. “Obviously, he is the player and he is going to go with what he wants. Jimmy was a veteran and kind of did his thing. We would talk through things, but when it came to certain shots, he would just kind of play.”

Hodges has given Medley a lot of freedom on the course.

“He wants me to be honest with him,” Medley said.

“A lot of it is because of the work we have put in. I appreciate him doing that, and I think we have a good, trusting relationship already. We know we are both looking out for each other’s best interests and I am there to help him in any way I can.”

The role of the modern caddie

That’s in stark contrast to the old caddie credo of “Show up; shut up; keep up.” These days, caddies play prominent roles with their players.

Hodges and Medley linked up in New Orleans for the first time and it’s been a good pairing ever since.

“A lot of that comes from learning Lee,” he said. “We had some great experiences this summer when we put ourselves in some really nice positions to have some good finishes and didn’t quite take advantage of it. We learned a lot from it. One thing Lee and I do a lot is self-evaluate rounds and tournaments.

“We find all the positives we can take and whatever negatives there are, we are putting our time in to try to improve.”

Medley said Hodges is easy to caddie for.

“He’s very focused, very self-determined,” he said. “He loves golf, and I love that. When we are out there, we’re trying to stick to what we do every day. One thing we try not to do is not get too excited when something good happens and not get too down when something bad happens. Just kind of knowing we are doing all the right things, then results are going to come.”

While Medley once dreamed of playing on the PGA Tour, he has no regrets.

“I did have some,” he said. “I’d be lying if I said I didn’t have that. I have kind of let that go. Everything happens for a reason. I am at total peace with not being the one pulling the club back because Lee hits it better than I ever thought about hitting it. I like the way I feel when he is standing over the golf ball.”

Don’t expect Medley to be lugging a bag well into his 70s like Mike “Fluff” Cowan. With caddie earnings at an all-time high and only going higher, Medley will call it a career long before then he’s eligible for Social Security.

“If Lee plays good enough, I won’t be,” he said. “Caddying takes a toll on the body. Right now, I feel like I am in good enough shape and the young energy that he has has sparked me a little bit, so I am in no hurry. I feel like we are just getting started.”