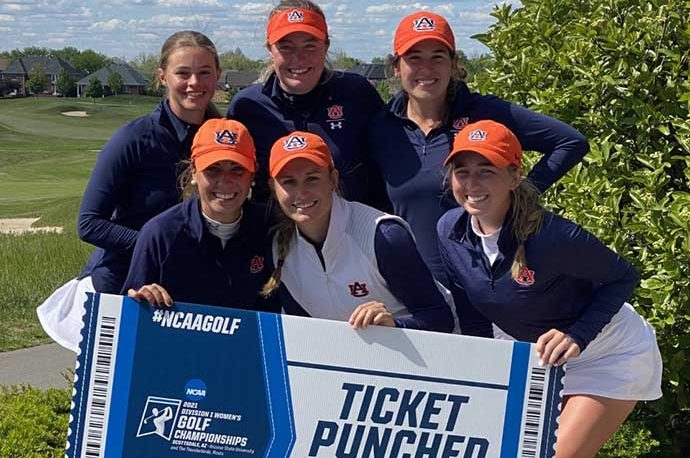 Tigers Move on to in Dramatic fashion

The Auburn and Alabama women’s golf teams found different ways to qualify for the upcoming NCAA Women’s Championship to be held May 21-26.

Auburn needed a clutch putt from Kaleigh Telfer on the final hole at the University of Louisville Golf Club fo earn its spot in the championship, while Alabama didn’t have to hit one shot in its regional tournament appearance to advance.

Both teams will travel to Scottsdale, Arizona, for the NCAA Women’s Championship.

Telfer needed, and made, an eagle on her finishing hole for the Tigers to have a chance to advance. She hit a 5-iron to within 18 feet for her second shot on the par 5 and the got the putt to fall.

Playing in the Louisville Regional, Telfer’s eagle put ninth-ranked Auburn at 2-under, the only school in the 18-team field to break par in the final round. The Tigers finished at 14-over, then waited while No. 1 South Carolina and No. 17 Arkansas finished their rounds. The Gamecocks then beat out Arkansas to earn the final spot.

Telfair, from South Africa, said she had a feeling her team knew she was going to make the putt.

“I could just see it going in.” she told auburntigers.com. “I hit a good putt and it lipped in.”

Auburn coach Melissa Luellen wasn’t surprised Telfair came through in the clutch. She’s seen it before.

“She just has a knack for it,” Luellen said. “She loves that position. She never gives up. I’ve seen her do it a few times. She did it at SECs when our back was against the wall. She gives herself a chance. She makes a lot of putts that length.”

Several hundred miles away in Baton Rouge, Louisiana, Alabama sat around for three days watching it rain before NCAA officials made the controversial decision to cancel the regional tournament, allowing the top six seeds to advance to the championship.

Alabama was seeded sixth at the regional and advanced to play at Grayhawk Golf Club in Scottsdale, Arizona.

Coaches and players from teams that did not advance were upset at the decision. Among the teams that failed to advance was Jacksonville State University, champion of the OVC.

More than seven inches of rain fell on the University Club course at LSU. In announcing the cancellation, NCAA officials said the course was playable, but not up to championship standards. Coaches who walked the course said it was wet, but playable, and said officials missed several windows of opportunity to play.

They said local rulings for things such as bunkers that were unplayable due to standing water could have been put in place to ensure the tournament was played. One par 4 would have had to be played as a par 3 due to water in the fairway.

Officials said they alerted coaches that it was possible the tournament miht notwould not be played due to the weather and course conditions.

For Alabama coach Mic Potter, this will be his 14th appearance with the Crimson Tide at the national tournament. Alabama won a national title in 2012.