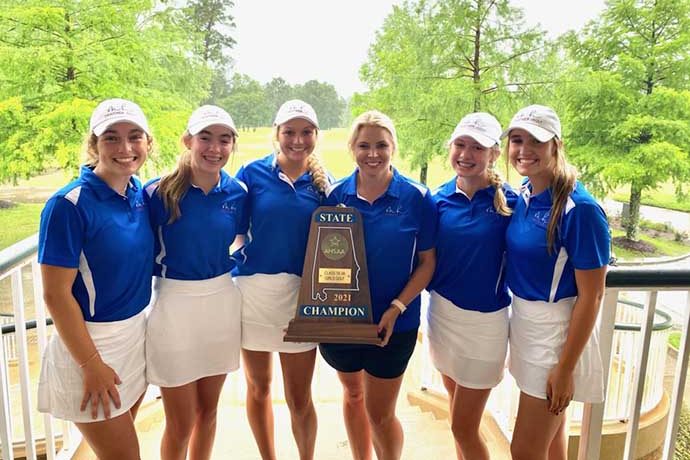 When rain and lightning forced AHSAA officials to cancel play, scores in all but two classifications reverted back to the first round. So, instead of some fantastic finishes, teams leading after the first round were declared winners.

The tournament was played at the Robert Trent Jones Golf Trail’s Magnolia Grove facility. The girls teams played the Crossings course and the boys played  the Falls course.

Having taken into consideration the dire forecast for the tournament, it was scored as four stipulated nine-hole rounds so champions could be declared in each class. Weather delayed play in the first round of the Alabama State High School Golf Championships for approximately one hour.

The Class 7A boys Alabama State High School Golf Championships race was setting up to be the most intriguing. Only four shots separated the four teams competing. But instead of a pressure-packed final round, Vestavia Hills emerged with the title after shooting 296 on the first day. Enterprise was second at 298, while Auburn finished third at 299 and Hewitt-Trussville finished fourth at 300.

Auburn’s William Steldt took medalist honors with a 68, while Enterprise’s Jon Ed Steed was runner-up with a 70.

The Class 7A girls competition was equally tight with the top three teams separated by three shots. Spain Park was declared the winner after shooting 223 in the first round. Huntsville was second at 224 and Auburn finished third at 226. Auburn’s Kate Ha was medalist with a 69. Molly Davidson (Hewitt-Trussville) and Courtney Johnson (Spain Park) tied for second at 70.

Mountain Brook ran away with the Class 6A boys title, firing 284 behind Gordon Sargent’s 69 and Evans Gross’s 69. Spanish Fort edged Homewood by two shots for second place, 19 shots behind.

Guntersville (294) took the Class 5A title by nine shots over UMS-Wright. Rehobeth’s Brantley Scott was medalist with a 68, while Guntersville’s Paul Bruce was second with a 69. That was one shot better than teammate John Bruce and Russellville’s Eric Boutwell.

White Plains won Class 4A with a by 26 shots over Haleyville in a tournament that got in 27 holes. Haleyville was second and Deshler was third. Deshler’s Luke Linley shot three rounds of 35 to edge first-round leaders s Zach Ashley (Brooks) and Kenny Okins (White Plains) by one shot.

Jake McDonald shot 72 and teammates Mason Crowder and Matthew Streitman each shot 74 to lead Houston Academy to the Class 3A title by three shots over Bayside Academy. McDonald was medalist, while Crowder, Streitman and Bayside’s Will Middleton tied for second.

McGill-Toolen won Class 6A girls with a 347 total, seven shots better than UMS-Wright. Laura Burch of McGill-Toolen was medalist with a 27-hole total of 109, three shots clear of Frances Brown (UMS-Wright) and Alley Beth Waldrop (Jasper).

The White Plains girls (241) matched their boys team, winning the Class 4A-5A division by seven shots over Northside. Ashlee Allen and Erika Allen, both of Northside, finished first and second with scores of 71 and 72.

Mars Hill won its first girls championship over Bayside Academy in a scorecard playoff between No. 4 players after the teams tied at 258. Brindlee Mountain’s Ellie Cothran was medalist with a 72. Lauren Thompson of Providence Christian was second with a 75.