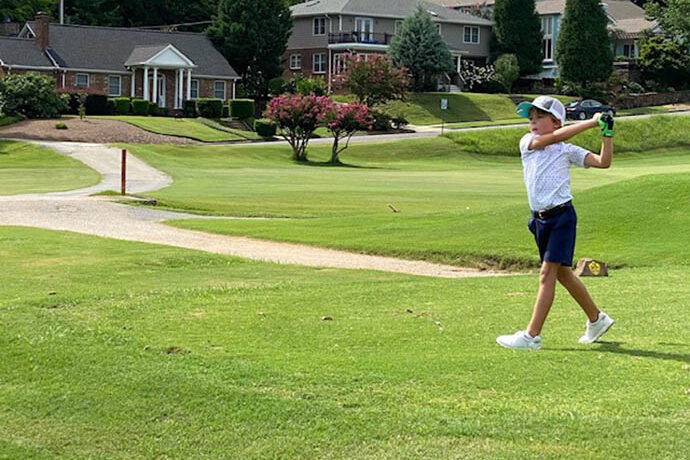 7-year-old is driven to compete

ANNISTON – Manning Askew had a birthday in early February and the best birthday present a 7-year-old golfer could ever get was waiting for him in the mailbox.

That’s the day invitations for the US Kids World Championship went out around the globe and Manning’s was waiting for him when he got home from school.

“It was the greatest gift in the world because I get to play three days of golf,” the Donoho second-grader said. “It was a big surprise. I went crazy.”

Understandable. This isn’t just any junior tournament. The Us Kids Championship,  held in the Pinehurst area next week, brings youngsters together from all around the world. Manning will be playing in the 27-hole Boys 7 Division Aug. 4-6 at Mid Pines Golf Club.

He’s the only player from Alabama in his 116-player division field and one of 20 from the state in the entire event for boys and girls aged 6-12.

“I am working really hard and I am trying my best to win,” he said.

He’s been doing that a lot lately.

Manning has been playing from the time he could stand. He got his first real set when he was 2 and been on the golf course ever since, tagging along with his dad Warren for a loop around Anniston Country Club.

He beats the kids and holds his own with the adults. He has progressed to the point where he challenges birdie and eagle on every hole from the tees he plays and bogey becomes a motivator.

“I’ve coached a lot of junior golfers and he’s probably my best 7-year-old I’ve ever had, really,” said ACC lesson pro Patrick Patterson, who works with Manning for an hour every week. “One thing that’s cool if you do watch him play a round of golf is how consistent he is. He’s very consistent with his ball-striking and his short game as well.

“He’s got the game at 7 years old that most 30-, 40-, 50-year old guys wish they had. Me and some of the other members after his lesson yesterday were driving up to the clubhouse and joking with him that we know he’s going to play for the Auburn Tigers golf team and the PGA Tour,” Patterson said. “If he sticks with it and keeps that passion he has for the game, he’s going to go a long way.”

Manning got hooked on the idea of playing tournament golf and the US Kids World Championship after watching the 2013 documentary “The Short Game” that follows a handful of 7- and 8-year-olds at the event. He watches the film so much, Warren said, he can recite the movie like the adults quote lines from “Caddyshack” and  “Tin Cup.”

Last summer he played in the AGA 13-and-under junior state championship and after that the Hot Wheels got put up and his attention turned full time to golf. He’s at the course from dawn to dusk and when he’s home he’s immersed in the video drills he gets from Patterson.

He played in a US Kids Championship event at Coosa Pines in August and learned all about the program. He won all five events of his events on the Montgomery fall tour, including the Tour Championship, and in June he finished second in his age division at the State 13-and-Under Junior Championship at Highland Park. He dominated his age group in the PGA Junior League at ACC.

‘I can’t give him a shot anymore’

“Where I’ve got him playing from [at ACC I can’t give him a shot anymore,” Warren said. “He set a goal for himself last summer and I just had to figure out how to make it happen, He’s got a mindset that I don’t have. I’ve played in a lot of tournaments, but he has a mindset I don’t have to this day. The focus he’s got, he’s driven and I’m impressed by it.”

Manning is going to be a busy boy next week. As soon as he finishes up in North Carolina, he has to rush back to Alabama to compete the next day in the second round of the Drive, Chip and Putt Competition at RTJ Capitol Hill, two steps shy of a date with Augusta National.

“I really want to make it to Augusta,” he said.

Heaven can wait. First, the world.

Heaven can wait. First, the world.