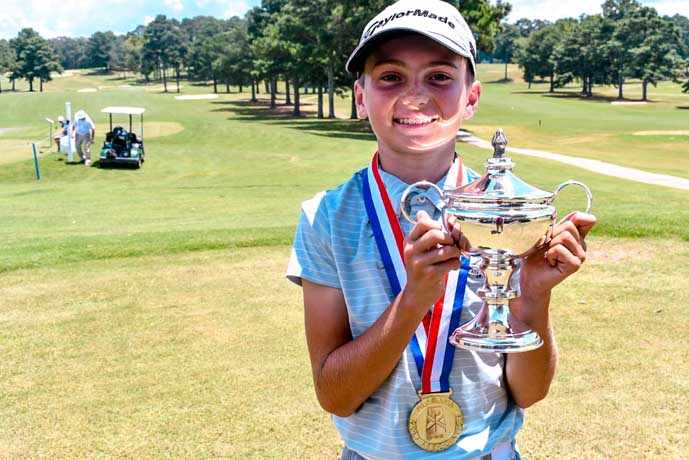 Talk about going low. Tyler Watts did just that Wednesday at Goose Pond Colony Lake Course, shooting 11-under 61 in the final round of the first Alabama Boys 13 & Under Junior Championship.

The 13&under tournament was being held along with the 75th Boys State Junior Championship.

On Wednesday, the stage belonged to the 12-year-old Tyler Watts, who is from Huntsville. In addition to winning the first 13&under title, Watts established a tough-to-beat record for the new tournament.

He finished the 36-hole tournament at 11-under 133 after shooting even par 72 in the first round.

“The hole looked pretty big today,” Watts told the Alabama Golf Association after the round. “Everything that missed yesterday went in today, so I just played really well. All the putts fell, so that’s what counts, right? I think my eagle putt on No. 15 (his sixth hole) was a momentum changer, and that’s what made me start to realize that I could go low.”

Watts started his round on the back nine of the Lake Course and played the first six holes 6-under, including an eagle. He added another birdie to make the turn in 29. He shot 32 on the final nine, playing from the AGA blue tees.

He started the final round two shots off the pace and eventually settled for a five-shot win over Helena’s Jack Childers, who shot 68 in the final round.

In the state boys junior, two players shared the second-round lead heading into the final round. Fairhope’s Max Johnson and Anniston’s Kenneth Okins led the way with matching 9-under 135 totals. Johnson shot 69 in the second round and Okins shot 68.

“This is my last junior tournament that I’ll ever get to play in,” said Johnson, who will play collegiately at Auburn University. “It’s very motivating to try to come out and win this.”

Okins got hot on his final nine to pull even with Johnson.

“On the back nine I started to play really well,” Okins said. “I hit everything within about five feet for four birdies, so it was pretty good.”

The field was bunched behind the two leaders, with Mobile’s Gregory Jones at 136 after shooting 70. Selma’s Jones Free and Huntsville’s Trent Trousdale are two shots back at 137, while four players are at 138.

Gregg Dewalt, former sports editor of Florence’s Times Daily, is the editor of Alabama Golf News. Reach him at TeeTimesGregg@gmail.com.