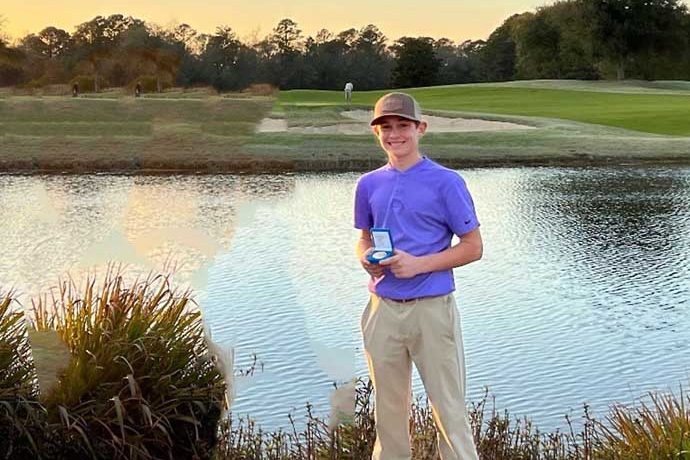 Golf’s biggest names are set to tee it up next week at Augusta National for the annual playing of The Masters.

Before Justin Thomas, Rory McIlroy and possibly even Tiger Woods make their way to the first tee, the famed course will host the Augusta National Women’s Amateur and then the finals of the national Drive Chip & Putt competition.

Two youngsters from Alabama are among the finalists headed to Augusta, Georgia for the Drive Chip & Putt finals. Bailey Sutter, an eighth grader at West Point High School, will compete in the 14-15 boys division. Emma Kate Rice of Mountain Brook, will participate in the 10-11 girls division.

“Words cannot explain it — it’s awesome,” Sutter said. “I’ve been waiting to play there. Just seeing it in general is going to be pretty nice. It’s the best of the best.”

He will represent the Middle Atlantic Region and compete against nine other regional qualifiers from around the country.

As for what lies ahead, Sutter, 14, will have to showcase his skills in three different competitions.

He and other participants will attempt two drives down a 40-yard wide fairway, two 10- to 15-yard chip shots and one putt from 15 and 30 feet out, respectively.

Points are counted per shot, and the overall champion in each division is determined by which golfer accumulates the most points over all three challenges.

“I’ve just got to trust the work I’ve put into it,” Sutter said. “I’m most confident in my putting and chipping, but I’ve got to hit my driver pretty hard to keep up with the bigger guys.”

Sutter, who started playing golf when he was just 18 months old, is a member at Decatur’s Burningtree Country Club. His career-low round is a 66 at Twin Bridges Golf Club, and his favorite golfer is Tiger Woods.

“I’m really hoping to see him there,” he said of Woods, who — according to media reports — played a practice round at Augusta on Tuesday as he looks to return following an injury layoff. “Getting to stand where he did when he won the (2019) Masters is really cool.”

Three of Sutter’s younger siblings — brothers Rawlin, 13, and Kip, 6, and sister Brooklyn, 12, — also competed at the local qualifier. Rawlin and Brooklyn both advanced to sub-regionals, and the former joined Bailey at regionals before falling just short of reaching the finals.

“That was nice,” Bailey said of competing alongside his siblings. “I wish that Rawlin had made it with me, but getting to play with him in those three qualifiers was fun.”

Rice secured her berth at Augusta National by winning her regional qualifier at The Bear’s Club in Florida.

“I’m really excited to go to Augusta,” she said after winning the regional. “I can’t wait to go and have fun. It just shows you can really do anything if you set your mind to it.”

The finals will air live Sunday on Golf Channel at 7 a.m.

Jake Winrey is the newest contributor to ALabama Golf News