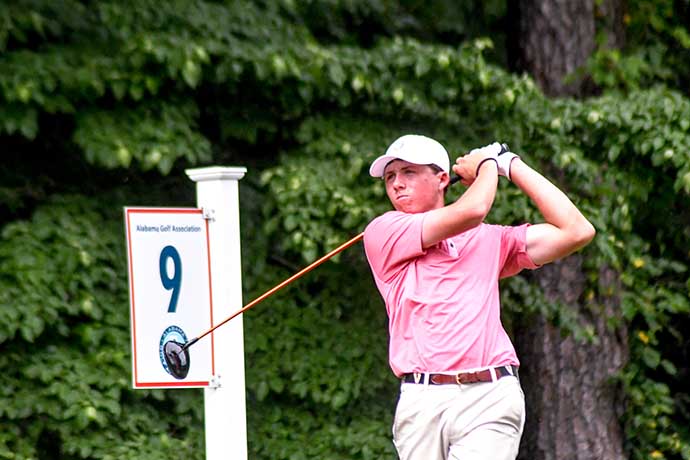 Gordon Sargent didn’t have to be great in the final round to win his second consecutive Alabama State Amateur Championship Saturday. His third-round 62 took most of the mystery out of the final day.

Instead of having to go low to fend off the rest of the field, all the Vanderbilt signee had to do was play steady golf. He did, shooting even-par 71 at Pine Tree Country Club to beat Connor Newton by three shots to claim the title for the second straight season.

Sargent, a recent high school graduate and the Alabama Golf Association’s 2020 Player of the Year, finished at 17-under 267. He opened the tournament with back-to-back rounds of 67 before taking control in the third round.

“I was looking forward to the task of defending this week,” Sargent told alabamagolf.org, the official website of the Alabama Golf Association. “I ended up making 10 birdies this afternoon, when my putter got hot. That was a pretty good feeling. I can’t thank the AGA enough for what they’ve done. It’s pretty special to have my name on the trophy twice, especially when the field was so great.”

With Sargent holding a commanding five-shot lead heading into the final round, the best Newton, of Auburn, could do was get within three shots as he closed with a 69. He finished at 270.

Despite not being able to chase Sargent down, Newton was pleased with the way he performed.

“It felt good,” Newton says. “This is the first time I’ve been in contention, so I thought I handled myself well. I had a fun week.”

Sargent and Newton separated themselves from the field. Fred Goldasich of Homewood was a distant third at 8-under 276.

Gordon is the first back-to-back winner of the Alabama State Amateur since 2015 and he was the youngest player in the modern era to win the state am title with his 2020 victory.

Auburn’s Morgan Jones didn’t give anyone much of a chance to chase her down in the final round of the Alabama Girls State Junior Championship. Playing her best golf of the tournament, Jones closed out the tournament with a final-round 8-under=par 64 at the Canebrake Golf Club to pull away for a seven-shot victory.

Jones finished the tournament at 13-under-par 203.

“My irons and putting were definitely the high points of my game today,” Jones told alabamagolf.org. “I got a great flow and landed great putts.”

Birmingham’s Molly Brown Davidson shot 69 in the final round to finish second at 6-under 210.

Christine Chang, another player from Auburn, finished third at 215. Midland City’s Lauren Thompson was fourth at 216 and Huntsville’s Gabriella Nicastro was fifth at 218.