Masking tape can unmask the cause of your mishit drives 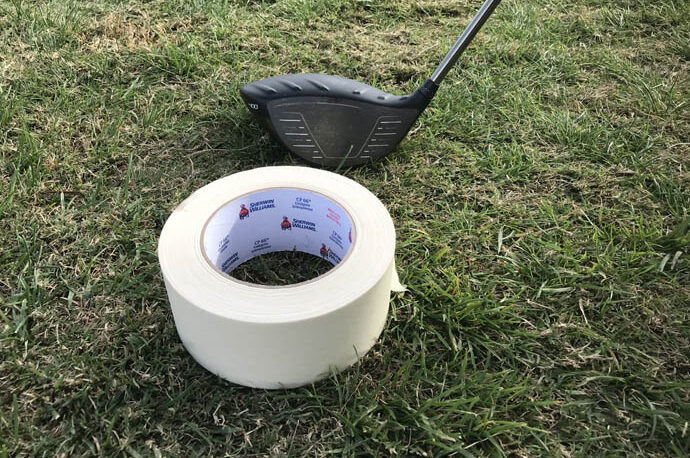 The tape tells the tale

I have a long, sad history of topping drives but a $4 roll of masking tape helped diagnose the source of my problem: the height I’ve been teeing the ball.

For years I’ve been teeing the ball so that half the ball (or so I thought) was above the top of the driver. I used my pinkie finger as a gauge when putting the peg into the ground.

Now, I must confess, I have always had a problem with keeping a steady head – swaying off the ball on the back swing  or lifting up before impact. It made life miserable.

But yet, even when those flaws were identified and corrected, I still topped the ball occasionally. It was maddening to know I had stayed rock steady but was still burning worms.

Making par after a 60-yard drive is no mean feat, I am here t tell you.

So I went to my teacher, Monty Mills, a former GolfTec instructor here in Albuquerque, who looked at four swings, two of them serious mishits, before pronouncing his diagnosis.

“You’re teeing the ball too low,” he said, reaching into a tote bag to pull out a roll of 2-inch painter’s masking tape.

He teed the ball up higher, so that about two-thirds of it was above the top of the driver, then he tore off a piece of tape and pressed it lightly onto my driver’s face. On the next swing I made solid contact and launched a drive on a beautiful trajectory – one I had rarely seen of late.

The dimple pattern from the impact was clearly visible on the tape, smack on the center of the clubface, right on the sweet spot.

Monty left the tape on the clubface and had me hit again. Another perfect launch. The second dimple pattern practically on top of the first.

Then he pulled the tape off the clubface and reattached it. The dimple patterns went away. You could do this all day with a single piece of tape he said.

Next he held up my diver’s head at face level and pointed out that while the loft of the sweet spot was 10.5 degrees, the top of the driver’s face was about 12 degrees. and, importantly for me, the bottom of the clubface had a loft of just 9.5 degrees.

Thinking back on my last round, I realized that even when I remained rock steady and managed to make good contact, the ball flight was lower  and the distance less than when my Ping G400 driver was new.

Over time, we concluded, I had been teeing the ball lower, letting the ball creep forward of my left heel – or both – which meant a lower ball flight and lost distance on solid hits, and topped shots on poor swings.

On my way home, I stopped by a paint store and picked up my own roll of tape. On the next trip to the range, I banged off a bucket of balls looking for the combination of ball position and tee height that generated the greatest consistency in sweet-spot hits.

Admittedly, it’s still a work in progress, but the mystery of topped shots has been solved – thanks to a $4 roll of masking tape, which is several hundred dollars less than the cost of a new driver.

Dan Vukelich is the Online Editor of Alabama Golf News. He lives in Albuquerque, N.M.