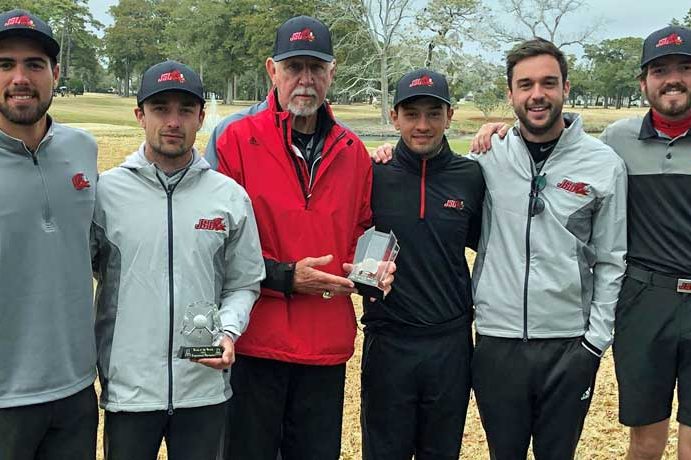 There’s no question about it, Jacksonville State knows how to wear out its welcome at the Bash at the Beach Collegiate tournament.

For the third straight year, the Gamecocks emerged victorious at the Bash at the Beach event in Myrtle Beach hosted by Appalachian State.

Shooting under par in all three rounds and putting all five players in the top 12, Jacksonville State rolled to an eight-shot victory over UConn. JSU finished at 21-under-par 843, while UConn was second at 851. Host Appalachian State was two shots farther back in third place at 853 in the tournament played on the par-72, 6,800-yard Surf Golf and Beach Club.

Quim Vidal Mora, who tied for medalist honors, to lead the Gamecocks to a second consecutive tournament title this spring.

Vidal Mora tied UConn’s Jared Nelson for medalist honors after shooting an 8-under 208 over the two-day, 54-hole event. A native of Barcelona, Spain, Vidal Mora shot rounds of 73 and 68 on Monday before turning in a 5-under 67 in Tuesday’s final round.

Senior Jesus Dario Montenegro finished just one shot off of the lead with a 7-under 209 that tied him for third.

Junior Maximo Portais, also a native of Buenos Aires, finished sixth with a 3-under 213. Junior Jackson Singletary claimed a Top 10 finish in a tie for 10th, thanks to his even-par 216 for the tournament.

The tournament was played at Greystone Golf and Country Club.

“Proud is an understatement,” head coach Ryan Ashburn told UABathletics.com. “These girls have worked extremely hard this past month and its paid off. Tia is a rock star. She’s won two tournaments this year and I hope she adds more to it over the next month. Things we have been working on are slowly coming together at the right time, and I can’t wait to head down to Gulf Shores with this momentum.”

The Blazers compete in the Bama Bash at the Beach in Gulf Shores on Friday.

Bailey Dunstan led Samford with a T3 finish at 148.

JSU’s Berta Sanchez Sabe was sixth at 149, while Alabama State’s Kei harris and Jade Sanders were tied for 29th at 158. North Alabama’s Hanna Pope and Tori Roush were T42 at 163.