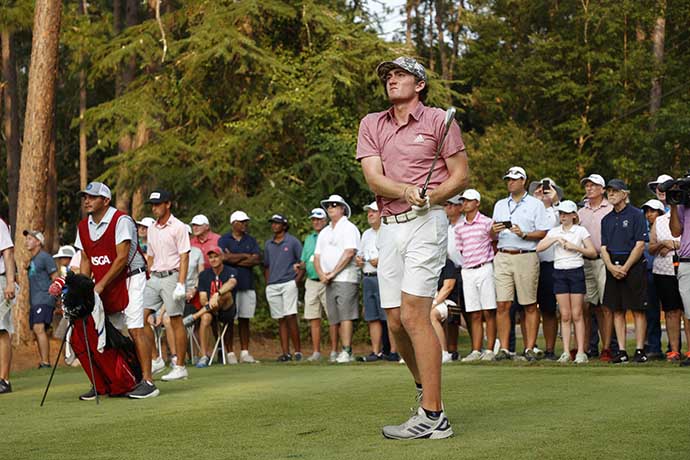 One-on-one with U.S. Junior Amateur Champ Nick Dunlap on the eve of the U.S. Amateur

Nick Dunlap was running a few minutes behind schedule on his way to an interview at the Canebrake Club in Athens, Alabama. “My mom had me do a few things,” the text message read.

When your mother requests something, not even the recently crowned U.S. Junior Amateur champion can say no. Not that he would. Seventeen-year-old Nick Dunlap is adamant he will never use the “Don’t you know who I am?” card to get out of doing household chores or to garner extra privileges. For Dunlap, taking shortcuts is not an option.

“I won’t ever do that,” he said. “My parents have done a good job kind of keeping me grounded. Obviously, winning [the junior am] gets me a lot of stuff – it gets me into the U.S. Open, but I want to do more than that. To do that, you can’t let the noise get to you. Do what got you there.”

Dunlap will tee it up next week at the biggest amateur event in the world – the U.S. Amateur Championship at the iconic Oakmont Country Club outside Pittsburgh.

It will be his second time teeing it up it in the event, having competed in the 119th edition at Pinehurst in 2019 when he was 15 after qualifying out of Chapel Hill, N.C.

While that was a learning experience, the goal is different this time, especially coming off his July 24 win at the junior am at the Country Club of North Carolina.

With the experience gleaned at Pinehurst and during his win at CCNC, Dunlap said he feels prepared for what he will face at Oakmont.

“I had never played a course like that,” he said. “I think that prepared me a good bit for CCNC. I think Oakmont will be similar to what Pinehurst was two years ago. It will be set up firm and fast. You have to drive it really well and it is going to test every aspect of your game, as well as mentally.”

Dunlap, who took several days off to decompress after winning the junior am – which entailed winning six matches in four days after 36 holes of qualifying. He enters the U.S. Am with tremendous confidence: In his past six tournaments, Dunlap has three wins, a pair of second-place finishes and a fifth-place finish. All of those finishes were in the junior ranks, though. The U.S. Am is a step up in competition.

Dunlap tees off at 12:45 p.m. CDT Monday on No. 9 of the nearby Longue Vue Club, the U.S. Amateur’s second venue for the stroke-play portion of the competition. He tees off at 7:30 a.m. CDT Tuesday on No. 1 at Oakmont.


“I’d be lying if I said it didn’t add a little pressure, but in the end, it is still golf,” he said. “If you play your game and do what you are trying to do and execute, you are going to end up where you are going to end up. There will be more pressure as the level keeps getting higher, but it’s still just golf with a little bit bigger prize at the end.”

Although it is a bigger stage, Dunlap has been preparing for his moment most of his young life. Born in Birmingham, his family had a membership at Greystone Golf and Country Club. He still frequents the course and often tees it up – and holds his own – with a variety of PGA and Korn Ferry Tour players who play there. It’s also where he met Jeff Curl, his caddie. Now that he lives in Madison, a suburb of Huntsville, he plays with Korn Ferry Tour standout Lee Hodges.

Golf was not my first love, Nick Dunlap says

Before settling on golf as his favorite sport, Dunlap had a well-rounded sports background. His first love was baseball, a sport his father played in college. He also played basketball and football.

“Golf was actually my last sport,” he said. “It was kind of backseat to everything. I pitched a lot growing up and it got to a point where every time I threw a curveball it would hurt, and I kind of slowly fell out of that. I think I kind of got burned out.

In basketball, Dunlap said he was always the tallest player on his team but often went against opponents who were taller and could jump higher.

Dunlap played quarterback and running back in football but concussions  became a problem. “My mom put an end to that,” he said.

That left golf, a sport he began playing at age 8 but didn’t start taking seriously until he was about 12.

Nick Dunlap: You can’t be perfect at golf

“I grew to love it and it is super, super hard, which I think drew me to it,” he said. “You can never perfect it. Pretty much every sport there is you can be perfect. You can hold a team to zero points or throw a no-hitter. You can bowl a perfect game. In golf, it’s impossible. I guess you can birdie every hole but that’s still not perfect. You can never get so good at it and it’s super humbling as well.”

Dunlap, who was home-schooled, has only a couple of classes to complete until he graduates. He’s also planning to take some college courses this year. When he finishes, he’ll play collegiately at the University of Alabama, where’s he been committed since he was 14.

He’s going to try to make it back-to-back wins in USGA events as he heads to Oakmont. He’s done some research on the venue already.

“I know DJ [Dustin Johnson] won the U.S. Open there so I have watched it a little bit,” he said. “I kind of know what to expect – big, fast greens that have a lot of slope. They are bent, so the way I hit my wedges between CCNC and Oakmont will be a little bit different. I have to work on that. You will have to drive the ball as straight as you can. I imagine that rough is going to be fairly thick. The USGA will take this to a different level.”