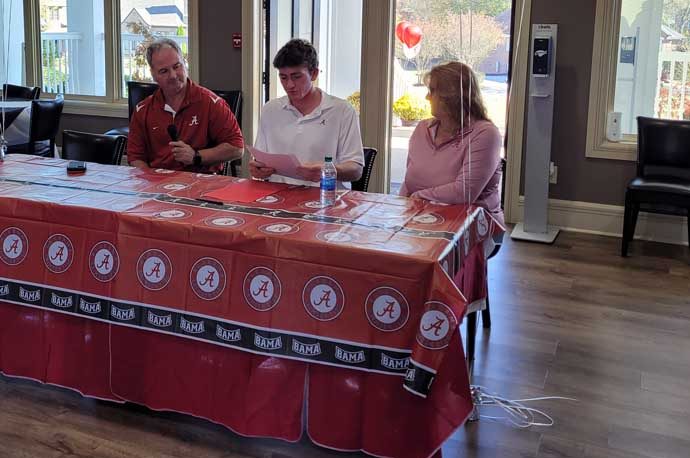 Flanked by his mother Charlene and father Jim, Nick Dunlap signed his letter-of-intent to play college golf at the University of Alabama. He will join the Crimson Tide in the fall of 2022. He signed at a ceremony at his home course – the Canebrake Club in Athens, Alabama – with family, friends and club members looking on.

The clubhouse dining room was decorated with crimson and white balloons and the table setting was covered with a University of Alabama themed tablecloth.

Dunlap, who lives in the Huntsville suburb of Madison, had been committed to Alabama since he was a freshman. He said he was excited to finally make it official.

“You only get to do this once in your life so you just try to enjoy it,” Nick Dunlap said. “I’m excited; it was kind of a dream when I first started playing golf to go to Alabama and play golf there. Just to have it be official today is pretty cool.”

Dunlap had a monster year that culminated with a No. 1 ranking in the Golfweek boys amateur rankings. He recently was named as the AJGA Boys Player of the Year.

Although he committed to the Crimson Tide as a freshman, Dunlap admitted looking at some other colleges in recent months. It wasn’t that he was wavering on his commitment; Dunlap said he just wanted to make sure he was making the right decision.

“I was kind of looking around at some other colleges to make sure this was what I wanted,” he said.

He said several factors put Alabama over the top.

“I came right back to it. Coach (Jay) Seawell’s track record and kind of how I felt when I went on campus and when I was playing with the guys,” Dunlap said. “How I jelled with the team. I’m going down there with a good buddy of mine – I think that’s what did it for me.”

Dunlap, who is homeschooled, said he is eager to be a part of Alabama’s golf team.

“I played team sports all the way up until my freshman year and I am looking forward to getting back,” he said. “In golf, you really only get one time to kind of be with a team and get that team aspect, so I am really looking forward to it.”

Another elite player coming out of The Canebrake Club

After a summer of extensive tournament play and travel, Dunlap’s schedule slowed considerably in the fall. He took time to allow some nagging wrist injuries to heal and to “try to give my body a rest.”

Canebrake Director of Golf Micky Wolfe said it’s always good to see the juniors at the club advance to play at the next level. He said with Dunlap’s signing and another later Wednesday at Athens High School, a total of 23 local junior players have signed to play college golf over the past decade.

He said it is a sign that the club embraces its junior program.

“We have a very supportive membership,” Wolfe said. “We take pride in these kids. We want to support them.

Wolfe, who called Dunlap the “most polished junior golfer that I have ever encountered, said that with each signing, Canebrake’s status grows.

“It shows that we have an elite practice area and elite golf course with a lot of really good junior golfers and mid-am golfers,” he said.

Wolfe said Dunlap is the latest in a long line of junior golfers at Canebrake who inspire others.

“Every time we have a kid like this, it pushes the next generation,” he said. “I can start with Andrew Medley and you go down the line to his brother James, and then Lee Hodges, we’ve had so many kids who drive those 8, 9, and 10-year-olds. Now, Nick will end up being the next one to drive those kids.”