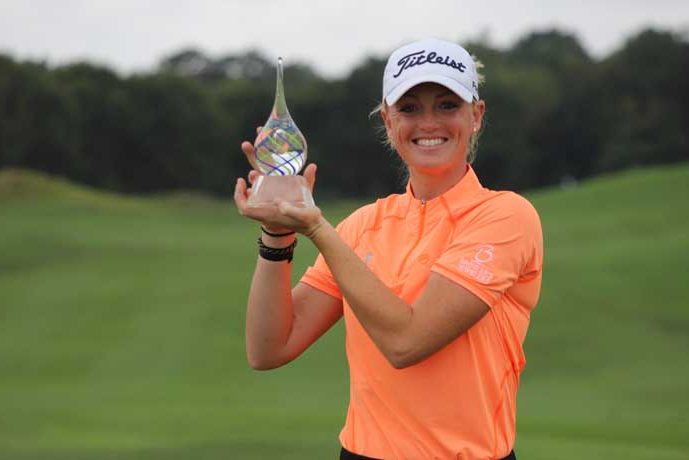 Janie Jackson was back on home turf, so to speak, at the Guardian Championship on the Symetra Tour last week.

A Huntsville native who has relocated to Phoenix, Jackson shot back-to-back 6-under 66s to win the rain-shorted event played at the Robert Trent Jones Golf Trail’s Capitol Hill site in Prattville.

Playing in front of friends and family and on a course with which she is very familiar, the 27-year-old Jackson won by four shots over Sierra Brooks and Katelyn Dambaugh on the Senator course, one of three courses at the Prattville location.

“It feels really special,” Janie Jackson told Ali Palma of the Symetra Tour. “This is a golf course I’ve played on pretty much since I was a little girl. I kinda know it like the back of my hand. I love being here and seeing some of the people who work here, they feel like family.

“Being able to be close to home, having my best friend Abby and my little brother Miller watch me was great. They don’t get to watch that often, so it was great to look over and see them cheering me on and support me.”

It was Jackson’s second win on the Symetra Tour. She also won in 2020 and then had wrist surgery.

While friends and family were cheering her on all week, as they’ve done her whole career, a newer face to the scene was just as happy about her second win.She is 26th on the Symetra Tour’s money list. The Capitol Hill tournament was her 11th event this year.

Jackson met her caddie David Kelley for the first time at this event two years ago. Since then, they have won twice together, including the Florida’s Natural Charity Classic, finished top-5 in the Race for the Card and now compete on the LPGA and Symetra Tour together.

Kelley will be with Janie Jackson as she competes this week at the Walmart NW Arkansas Championship presented by P&G as she enters the last few events of the 2021 seasons.

“In golf, I feel like it’s not how you start; it’s how you finish. I’ve had some good finishes in the past, followed up by some slow starts, so I think this is a good momentum builder going into these last few weeks of the year. I know my game is in a good place and getting a win is a good confidence booster.”