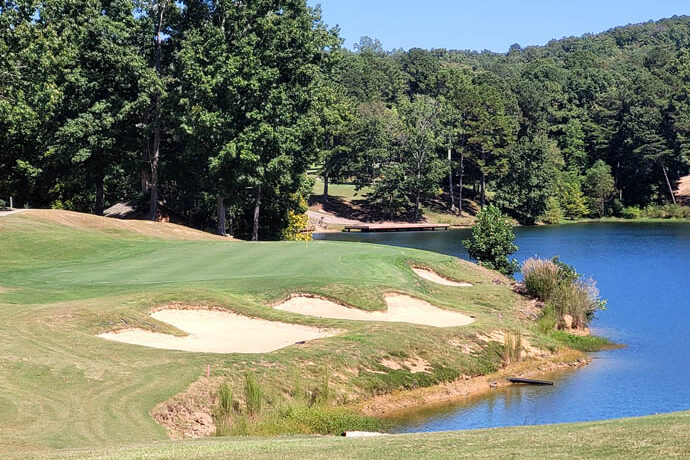 The club’s owner and former PGA Tour player had to like what he was seeing,

Dozens of golfers were milling about, talking, practicing and eagerly waiting for the unveiling of the recently completed greens renovation project at the semi-private golf course located just south of Huntsville in rural Marshall County.

What players encountered when they got on the course was impressive. In just nine weeks, new course superintendent Lester Lombard, his crew and dozens of members who helped with the project, transformed Cherokee Ridge’s old bentgrass greens into 18 pristine TifEagle Bermuda grass greens.

The grass matured so much that it was difficult to recognize that the greens were just nine weeks old. They are fully covered, receptive to approach shots and roll true. Thus, the smile on Green’s face.

“We’re excited,” Green said. “They are tournament ready at the moment. This is as good as anything I played on the [PGA] Tour as far as Bermuda grass. It is absolutely fantastic.”

Designed by Sammy Dean, Cherokee Ridge opened in 1992 and played host to what was then called the Nike Tour’s (now the Korn Ferry Tour) Huntsville Open from 1994-1997. Until now, the greens had always been bentgrass, which tends to struggle during Alabama’s hot, humid summers. Bermuda grass is more heat-tolerant.

“It shows you the hard work Lester and his maintenance crew have done,” Green said.

Lombard, a native of South Africa, came on board at Cherokee Ridge as the project was starting. Green said the timing was perfect.

“Lester has worked in converting greens before and he is someone I knew of for a very long time,” Green said. “He knew a lot of the people I know – Nick Price, Ernie Els – from the Tour, and it was a good fit.”

While the new greens were in the grow-in process, play continued on temporary greens. And while there was more play than he expected during the nine weeks, Green said the maintenance crew was able to do more maintenance on the course.

“From tree line to tree line, this is the best I have ever seen it,” Green said. “It shows.

The quick turnaround for the greens was a result of doing a no-till process that is less invasive.

After spraying the greens to kill the bentgrass, they were aerified and verticut in several different directions. Fertilizer and water were applied and sprigs placed on top of the greens. A machine then spliced the sprigs into the ground and the greens were top dressed and watered heavily for about 10 days.

With ideal growing conditions in late July and throughout August, the grass flourished and resulted in a surface that appears more mature than expected.

The result is what the club’s members and daily-fee players expected.

Green’s other course, the Auburn University Club, was scheduled to reopen this week after a more extensive renovation project designed to help the club attract major events.

Changes at the AU Club include the addition of 13 bunkers and 13 tee boxes. Several greens were redesigned and a new greens complex was built on the ninth hole. Green estimated 3,000 trees were removed. Design work was also done on several fairways. Green said the AU Club will stretch close to 8,000 yards from the tips.

“The work we did there was more extensive, and when you get into moving multiple tee boxes, redoing a couple of fairways, adding bunkers and redoing the greens, you almost have to do it in order,” Green said. “It’s not as simple as what we did a Cherokee Ridge.”

The AU Club course was closed for four and a half months.

Green said the ownership group was fortunate that Bergin, a former Auburn University golfer, was able to fit the renovation project into a busy schedule.

“He’s done a great job,” Green said. “To see how it goes from that side of the golf business is intriguing and exciting.”

All of the AU Club’s greens had some sort of changes.

“They are all larger and one green was completely redone – we bulldozed it all the way to the ground,” Green said. “We did a lot of work on holes 13 through 16 and we added 52 new sprinkler heads to the existing system. It’s a bigger footprint now. It looks open. It’s the same routing, it just looks open. It’s amazing.”