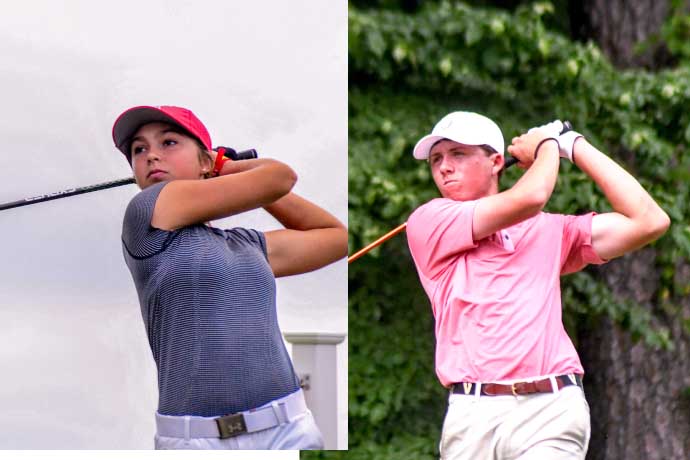 The AGA announced the winners this week on its website. The AGA uses a season-long ranking system to select its players of the year.

2021 Alabama Amateur Players of the Year

Gordon Sargent of Birmingham is a freshman at Vanderbilt University. He is one of the five individuals chosen to receive the prestigious Byron Nelson International Junior Golf Award. He defended his state title at the Alabama State Amateur Championship, finished runner-up at the Western Amateur and was a quarterfinalist at the U.S. Boys Junior Championship. He also advanced to the Round of 64 at this year’s U.S. Amateur. Sargent finished second at AJGA’s Ping Invitational, third at AJGA’s Simplify Boys Championship and went on to finish fourth at AJGA’s Rolex Tournament of Champions.

“It’s pretty special to be named as the Alabama Men’s Player of the Year,” Sargent said. “Jump-starting the summer and winning the State Am was big. It gave me my momentum heading into my freshman year of college.”

“It is such an honor to be named for both the Alabama Girls State Junior Player of the Year and the Alabama Women’s Player of the Year,” Davidson said. “I’d like to thank the AGA for helping me achieve my goals and better myself as a person. All glory to God for giving me the opportunity to compete with these incredible players. I look forward to the upcoming season and playing in more AGA events!”

“I’d like to say what an honor it is to win for the second year in a row,” Wright said. “We have such a strong and competitive senior class, which makes it all the more rewarding.”

Nick Dunlapof Huntsville is a senior at home school. He captured the U.S. Boys Junior Championship, winning his final match 3 and 2. Before that, he won the Dustin Johnson Junior World Championship, the U.S. Amateur qualifier and the AJGA’s Polo Golf Junior Classic. Dunlap finished T2 at both the Boys Junior PGA Championship and AJGA’s Wyndham Invitational. Dunlap will represent Alabama in next year’s U.S. Open at The Country Club in Brookline, Massachusetts. Dunlap has one career AGA State Title: Alabama Boys State Junior (2018). Dunlap was the 2018 Alabama Boys Junior Player of the Year.

The Alabama Junior Players of the Year awards are based on Alabama State Junior Golf Rankings. The points accumulated from September 1 thru August 31 of the current year are taken into consideration.

Past Alabama Players of the Year Award Winners