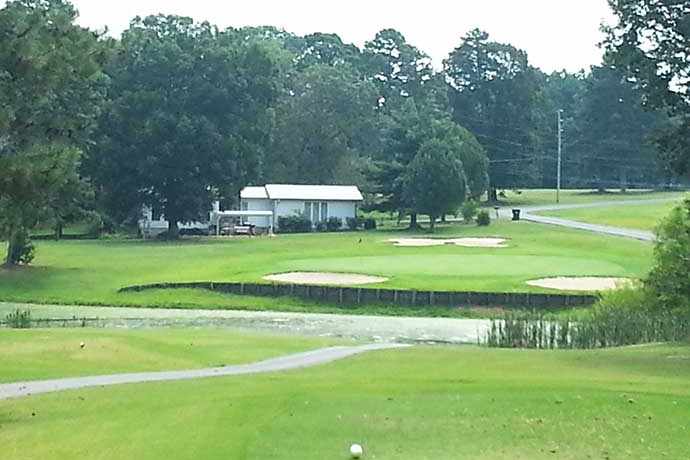 Off the Beaten Path but Playable, Affordable

We were looking for a Monday morning round recently somewhere around Northeast Alabama so we could meet a friend from Atlanta halfway. Three courses we looked into were closed for maintenance. And then my friend Jerry found a course called Dogwood Hills Golf Resort and Gardens in Flat Rock, Alabama.

“Never heard of it,” I told him, even though the price was right. I mean, who would have thought there would be quality, affordable golf in an out-of-the-way place like Flat Rock.

Turns out, there is. Dogwood Hills was a pleasant surprise – kind of like finding a piece of popcorn on the bottom of the bowl still dripping with butter.

Dogwood Hills Was Designed by its Owner, Builder

It wasn’t designed by Tom Fazio or Rees Jones. Donald Ross and A.W. Tillinghast never set foot on the property. Instead, it was the late property owner Bryce Slater who designed and built the course that opened in 1974.

According to the Dogwood Hills website, there’s even more to that story:

“Bryce’s work is obvious once you step onto the course. Not only did he design the course, but he cleared it himself and managed the entire construction project. Before the front nine opened, he even grew tomatoes in the fairways to help finance the operation,” the website reads.

If that is not the quintessential ‘Mom and Pop’ golf course story, then what is?

Bryce Slater passed in 2013, the website said, but Doris remains a regular in the clubhouse.

She was there when we walked in to pay for our round – $30 for seniors and $33 for non-seniors during the week. Doris asked where we were from and talked to us about the bentgrass greens, which were pure even though the Alabama heat is known to take a toll on bentgrass.

Before our round started, they even gave us a course guide/yardage book to help us navigate our way around the course.

Plenty of Water to Keep You Honest

There is enough water on eight holes to keep you honest, and strategically placed bunkers often appear greenside but are often 10 to 15 yards short that create some doubt in club selection. Land in them and you are faced with those pesky long bunker shots that quickly will ruin a score.

Tees and fairways a Bermuda grass and well maintained. Most of the fairways are pretty generous, but that doesn’t mean you can spray the ball all over the lot. The greens a Dogwood Hills have slope, but not a lot of undulations.

Dogwood Hills’ terrain features rolling hills and elevation changes that Bryce Slater was adept at using. On more than one occasion guys in our group thought they could clear a hill in the fairway and use the downslope for a slingshot effect, only to see their drive hit into the hill and leave a much longer approach shot.

Best hole: There are several good holes, but the short par-4 No. 13 plays 322 yards. The prudent play is to lay up off the tee, as a small creek bisects the fairway about 60 yards from the green. But it is enticing to cut the corner of the slight dogleg left to try to either drive the green or leave only a chip shot. Beware, though. That creek is pretty much a magnet for golf balls.

Overview: The two back-nine par-5s both have deceptive seconds shots with water in play. On No. 15, the prudent second-shot play is to the left of the large pond that is runs from about 135 yards out to within 25 yards of the green. On No. 17, the option is to lay back and leave a long, uphill third shot or gamble by trying to carry the water hazard to set up a short approach to a green that is narrow and 40 yards deep.

Dogwood Hills has a practice green and range, in addition to a snack bar. We managed 27 holes, playing the back nine twice. The par 3s are solid and the par 4s have some variety. Dogwood Hills might be a little bit off the beaten path, but it’s worth the drive just for the conversation with Doris.