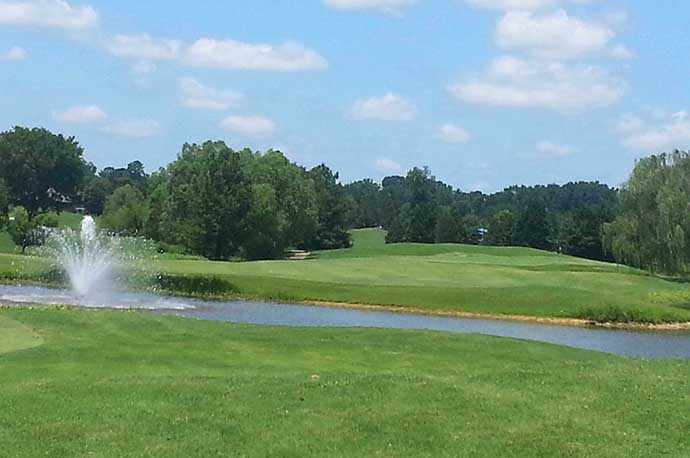 Golfers in the Florence/Muscle Shoals metro area in Northwest Alabama are fortunate to have some excellent daily-fee offerings from which to choose. Among them is Blackberry Trail Golf Course.

Also in the area is a Robert Trent Jones Golf Trail venue – The Shoals, which features 36 holes. There’s also Cypress Lakes Golf Course, owned by the city of Muscle Shoals.

But a standout on the Florence side of the Tennessee River that bisects the four cities that comprise the Shoals, there’s the solid, city-owned Blackberry Trail Golf Course.

Blackberry Trail is an 18-hole facility designed by Steven Plumer. The course features five sets of tees, stretching from 6,851 yards from the tips to 4,664 yards from the forward markers. The middle (white) tees play a comfortable 5,925 yards. It plays to par 72 from all tees.

Jason Vaughn is the PGA head professional and John Freeman is the superintendent.

Tees, fairways and greens feature Bermuda grass, and Blackberry Trail has a good practice range, large practice green and one practice chipping. The greens were renovated in 2018.

The course has a lot going for it. Because there is little elevation change, Blackberry Trail is easy to walk. Although the course winds its way through Plantation Springs, an upscale housing development, only nine holes are flanked by homes. Except for a few holes, greens and tees are generally close together.

Water is in play on 11 holes, but that doesn’t mean the course is tight. There are 27 bunkers, about half of which line the fairways.

This Florence Alabama Course is a Bargain

Freeman and his staff keep the course in good shape year-round. They cut the fairways low in the summer which means the ball is going to run out. Greens are generally receptive to good shots. In the summer and early fall, when the course gets the bulk of its play, it would be nice if the greens were faster. There also are some rough spots along the edges of some of the greens that Freeman’s staff is addressing. Generally, those rough edges don’t impede putting and the greens are big enough so that there are ample pin locations.

The course features a grill and patio area inside the clubhouse.

Two of the par 5s stand out. No. 8 is a slight dogleg left that features a pond about 265 yards off the tee. From there, water runs up both sides of the fairway, which narrows considerably as it gets closer to the green. The water also extends in front of the green, making this a nice risk-reward second shot hole. The 17th hole is another par 5 with water along the right side of the fairway and then up the left side all the way to the green from about 200 yards in. Plumer designed another risk-reward second shot that involves a long carry over water to the green.

Fun facts: Depending on which tees you play, No. 3 is a par 4 that requires a tee shot that must carry 200 to 230 yards over a stream in the middle of the fairway. The tricky part though is that a large tree stands in the middle of the fairway and can impede the second shot if your tee shot doesn’t carry far enough. … The 13th hole is a short par 4 that big hitters can have a go at if they feel frisky. A mishit, though, will end up in a pond that fronts the green.