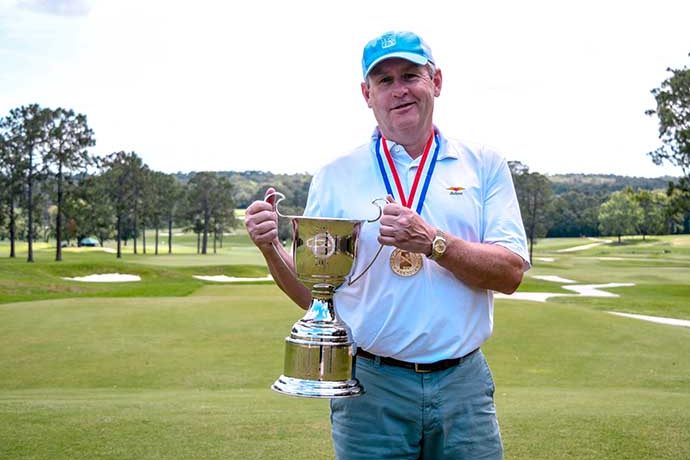 Doug McLeod and Fred Clark emerged as the winners of the Alabama State Senior and Super-Senior Amateur Championships Sunday in Mobile.

Both players are from Mobile.

McLeod shot three consecutive rounds of 1-under-par 69 to finish at 207, one shot ahead of defending champ David Hancock of Greenville. Both the Alabama State Senior and Super-Senior Amateur champions were contested at the Country Club of Mobile.

“I just tried to hang in there and last a few holes, and that’s what happened,” the Alabama Senior Amateur winner told alabamagolf.org. “I’m elated. It was just so special to do this on my home course and be surrounded by my buddies.”

Birmingham’s Claud Cooper shot 70 in the final round and came up two shots short of forcing a playoff.

The Super-Senior portion of the tournament was equally close, with Fred Clark grabbing first state. Clark shot 69 in the final round and finished with a 213 total for the 54-hole tournament.

Auburn’s Buddy Alexander was second. He slipped to 3-over 73 in the final round and finished a shot back at 214 overall.

Emile Vaughn of Pike Road shot 70 in the final round and was shots back at 215.

Former University of Alabama golfer Dicky Pride started the week as a Monday qualifier for the Mitsubishi Electric Classic.

After a final-round 67 Sunday, Pride was celebrating his first PGA Tour Champions win.

Making his 11th senior start, the 51-year-old Pride had six birdies in an 11-hole stretch before dropping a stroke on the par-4 15th. He parred the final three to win at TPC Sugarloaf a week after contending in the major Regions Tradition in his home state of Alabama.

“I am just thrilled. I am so excited,” Pride told PGATour.com. “Last week was really disappointing with a horrible final round in Birmingham, my home state. I really put a lot of pressure on myself to play well and really didn’t. So I came this week, was able to qualify and played really flawless over there. Then to put three rounds together.”

Stephen Ames and Kirk Triplett each shot 70 to tie for second with second-round leader Paul Goydos (72). Brett Quigley (68), Doug Barron (69) and Billy Andrade (72) were another stroke back.