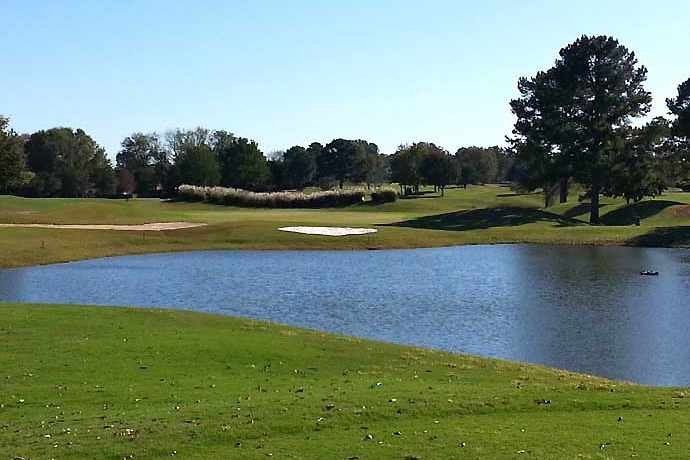 Cypress Lakes Golf and Tennis Club in Muscle Shoals, Alabama., is one of those understated city-run golf courses that probably doesn’t get the love it deserves. It’s also a perfect example of a golf course that you can’t judge by the stated yardage on the scorecard.

Pardon the cliché, but Cypress Lakes, one of four public courses in Colbert County, checks all the boxes in what a person looking for a good golf experience needs.

Challenging from all tees? Check.

Also, Cypress Lakes, an 18-hole, par 71 course, is getting better and ranks as some of the best public golf in Muscle Shoals. Some recent changes to the bunkering have made it more playable while reducing maintenance.

First, though, a little history about Cypress Lakes, which is in its third reincarnation. It started as Muscle Shoals Meritage in the 1970s and 1980s and was a hard-scrabble, city-owned course.

From there, a group of investors purchased the property and Roger Baird designed the current 18 holes that opened in 1991 rebranded as The Oaks. Ultimately, ownership deeded the course to the City of Muscle Shoals and the course is operated under the auspices of the town’s Parks and Recreation Department.

Aside from what are some of the best mini verde ultra dwarf Bermuda greens in north Alabama, the feature that stands out the most at Cypress Lakes is water. And there’s lots of it. Water comes into play on 13 of 18 holes, just waiting to gobble up slightly mis-hit shots.

Typical of Cypress Lakes is the opening hole, a seemingly innocuous short par 4 that measures a scant 307 yards from the white tees. A layup is required from the tee as a pond fronts the green, leaving just a wedge into a large, undulating green. But any slight mishit or poor club choice into the prevailing north wind will leave the player taking a penalty drop and hitting four, hoping to salvage a bogey so as the round won’t be derailed right off the bat.

The large greens at Cypress Lakes are pure and generally very fast, unlike some of the area’s other course offerings. They don’t have dramatic contours, but there are subtle ridges and obvious slopes that make reading breaks difficult. Get on the wrong side of the hole and even short putts require a defensive stroke.

The course recently reworked its bunkers. During the renovations, approximately 30 bunkers were removed to help make the course more playable and to help ease the burden on the maintenance staff. Many of the bunkers that were removed simply didn’t come into play very often and didn’t affect the way the holes are framed.

Now, more about all that water. It makes a course that only stretches to 6,523 yards from the tips challenging. It puts a premium on accuracy off the tee on the longer holes and necessitates good strikes on the par-3 iron shots. From the white tees, Cypress Lakes plays to 6,051 yards. There are three other sets of tees ranging from 5,031 yards (red) to 5,619 yards (gold).

Fairways are spacious, but with the abundance of water, pine trees and Bermuda grass rough, Cypress Lakes is more about strategy off the tee than just mindlessly bombing drivers off the tee.

The 15th hole is another example of what seemingly should be a birdie hole but can often yield a bogey or worse depending on the tee shot. Although it only measures an inviting 298 yards from the white tees – it screams go for the green – five bunkers and a strand of pines up the right side can turn what should be a benign par 4 into a nightmare.

Best holes: No. 7 is a 190-yard par 3 with a huge peninsula green guarded on three sides by water and a lone bunker. It’s a daunting tee shot despite how big the green is. The tee shot really is do-or-die. Anything that is mishit is bound for the penalty area. The 13th hole is a 413-yard sharp dogleg right with a bunker guarding the corner and water through the fairway that runs up alongside the green. It requires a good tee shot to get to the corner, followed by a crisp mid-iron to the green.

Cypress Lakes offers good value. Daily fees are $42, including a cart, while seniors can play for $30. During the summer there are twilight rates available. An added value is that Cypress Lakes is walker-friendly – there aren’t too many long slogs between holes.

Cypress Lakes is a full-service facility with a stylish clubhouse, grill and practice facility. There also are six hydro-clay tennis courts adjacent to the golf course. For more information, click here.