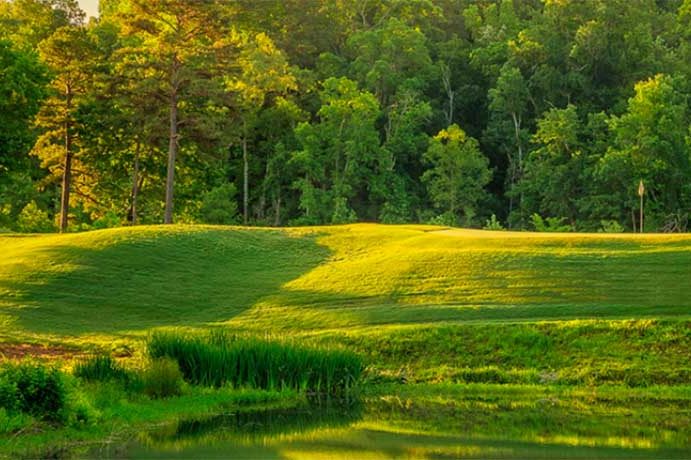 OXFORD – Cider Ridge Golf Club has been the only course in Calhoun County – and one of the only public-access courses in the eastern part of Alabama – where players putt on bentgrass greens.

It’s a distinction the course’s operators over the years have worn as a badge of pride.   To a lot of golfers, bentgrass means high-end and that’s the image the city-owned course wants to project.

But times they are a-changin’.

Players who fancy the smooth, pure-putting grass – like Cider Ridge operator Cory Etter – have only about three more months to enjoy it before the Bill Bergin-designed course joins the list of those that have converted to a hardier strain.

Starting in mid-May, the operator of the challenging 18-hole golf course will begin replacing the bentgeass with TifEagle Bermuda.

“Yes, we did know we we’re the only ones in the county that had that and it is a special feature,” Etter said, “but for the longevity and future of this place, it has to change.  ”

“If budget was never a concern, bent would be the way to go, but we’re trying to continue to increase in a lot of areas, and those areas are generally in the spring, summer and fall, so if a majority of your play is coming in the summertime, bent can’t really that take force.

“For the future of this place to continue to be successful and progress in that way, we have to make the switch.”

Cider Ridge’s greens have been bent since the day the course opened in 2002, with no resurfacing other than what takes place during regular maintenance, so the greens are well past their lifespan. Bentgrass greens typically are resurfaced every eight to 10 years.

Re-grassing with Tif-Eagle Bermuda starts in May

The conversion will start with the first of three eradication sprayings on May 9. Sprigs of the TifEagle Bermuda will go down June 7-8. With favorable weather, players should be putting on the new surfaces by Aug. 10.

The company doing the work, New Life Turf of Norway, South Carolina, is installing the same strain of grass at The Honours Course near Chattanooga on the same day. They’ll do conversions at courses in Tennessee and Georgia the following week.

The new grass also will be applied to a new 40,000-square-foot, 18-hole putting course and to the practice putting/chipping area at Cider Ridge.A smaller practice green will be built near the veranda just off the clubhouse.

At the same time, crews will renovate the par-3 tee boxes (Nos. 3, 8, 12 and 17) with Zoysia grass and relocate the usable Bermuda sod removed from those tee boxes to low areas of the golf course.

“These tees, over 22 years, have taken a ton of [wear] and they’ve been covered with sand,” Etter said. “This is the perfect opportunity to do it all at once.

Cider Ridge is challenging enough with its tight fairways and elevation changes, but once the greens take hold, players can expect it to play several strokes harder.

Greens that were built for bentgrass won’t accept certain types of shots. Their firmness may result in approach shots bounding over the back into some unfavorable places.

Green speeds will be more controllable; if they were resurfaced with one of the newer strains of bentgrass, they might become too fast.

“This course was built for bentgrass,” Cider Ridge Director of Golf Jammie Lett said. “You can see how the greens were built; they were meant to take a shot, they are elevated.  Bermuda typically is going to be a firmer surface. They will soften a little over time, but that’s a two- or three-year process.”

Crews will take some of the grade off several greens and bring others back to their original shapes, but for the most part, those changes won’t be noticeable; for example, don’t expect the tiers that define the 15th and 17th greens to go away.

Numerous trees have already been removed to promote turf growth on both the course and the greens, but their removal will not impact the course’s playability.

“It’s going to be a challenge the first year, it’s going to be tough, but I think people are going to like it; I think they’re going to really like it,” Etter said. “You have a lot of golfers who either really like bent or really like Bermuda. I grew up on bent and I like bent, but from where we’re at, for a public golf course in the middle of Alabama, it’s really not the best thing for it.”

He said players there took to the change well and expects it will meet a similarly favorable response here.   “All in all, I think the golfers will enjoy it once they get used to it,” he said. “I think it’s a great move. It’ll make a lot of people happy.”