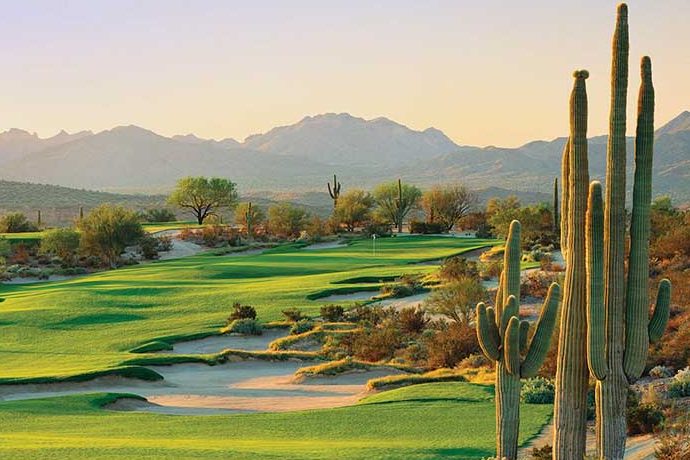 Phoenix Metro Golf Offers Something for Any Budget

When the Super Bowl weekend ruckus known as the Waste Management Phoenix Open ends, the Phoenix Metro area gets back to what it does best — serving up high-quality golf during a time of the year when most of the U.S. is still shoveling snow.

If you had plane tickets to attend the now-canceled Spring Training, you should go anyway because the weather there is great in April.

Here are some courses worthy of your attention. They span the price-point spectrum although – because spring is peak season in and around Phoenix – it won’t be cheap.

Longbow Golf Club is in the middle of the Phoenix area golf price range, with a midweek tee time in March going for between $128 to $145, depending on day of the week.

The terrain at Longbow is generally level but greens are often elevated.

Designed by architect Ken Kavanaugh and opened in 1997, Longbow is a good first round for a Spring Training golf trip, straightforward, open and challenging but not so tough as to beat you up. A 2003 remodel lengthened the course to 7,050 from the back tees.

The terrain at Longbow is generally level, but it’s not pancake flat. The fairways have swales and the greens are generally elevated.

The No. 1 handicap 439-yard Par 4 fourth hole is typical. Playing 364 yards from the white tees, the dogleg left around water requires an accurate tee shot that stays short of fairway target bunkers 210 yards out at the top of the kneecap. That leaves a 150-yard shot to a 44-yard-deep green sandwiched between the water left and a 33-yard-deep bunker left.

If you think a short course is just for wusses or seniors, then you haven’t played the Short Course at the Mountain Shadows Resort.

.Tucked away in the village of Paradise Valley between Phoenix and Scottsdale, Mountain Shadows is a 18-hole course, par 3 golf couse. The holes play between 165 yards and 85 yards, with most holes about 110 yards in length. Golf.com calls it “the best short course in America.”

Designed in 1961 and beloved by the Hollywood celebrities who frequented the Mountain Shadows Resort, the course was updated in the 1990s. The immaculately groomed Short Course plays between 1,735 and 2,310 yards, with plenty of uphill and downhill holes and a Miami Beach worth of sand bunkers.

One of the harder holes is No. 12, which plays across water to an extremely elevated green with a false front that can brutally reject short shots and send a ball 20 yards or more back toward the tee.

The short course is a blast, regardless of your skill level. Just make sure you have your A wedge game. Otherwise you’re in for a long day on the Mountain Shadows Short Course.

Tee times in mid-March vary between $51 and $103 based on time of day and day of the week.

The Cholla Course at We-Ko-Pa Golf Club just northeast of Fountain Hills,  is perhaps the most scenic course in Phoenix area golf. It ranked No. 46 on Golf.com’s list of the Top 100 Public Courses in America as recently as 2016-2017.

The manicured turf at We-Ko-{a’s Cholla course makes you think they vacuum the fairways at night.

Located on the Fort McDowell Yavapai Nation, neither the Cholla nor its Coore-Crenshaw-designed sister course, the Saguaro, have homes nearby. It’s just you, the course and the open desert.

Playing 7,225 from the back tees, the Scott Miller-designed course opened to acclaim in 2001. Cholla’s conditioning is probably the best this writer has seen in the Phoenix area – you’d swear they vacuum the fairways at night.

Rates in mid-March come in at between $240 and $265, but considering what you can get for $150 to $200 in the Phoenix area during high season, that’s a relative steal for the service, conditioning and challenge We-Ko-Pa offers.

The O’odham Course is wide, open and links-y in style while the Pipaash Course is tree-lined with well-defended raised greens.

For a round within five minutes of the shops, bars and restaurants of central Scottsdale, Talking Stick can’t be beat. It is among the most conveniently located courses in Phoenix area golf.

Rates for rounds on either course in mid-March run $165-$185 depending on day of the week. The Native American-owned golf properties offer significant discounts to players presenting a tribal ID.

The Phoenician traverses the base of the slopes of Camelback Mountain.

The golf course at The Phoenician Resort, a Marriott Bonvoy property, was renovated a couple of years ago, and the result is that the Phoenician is one of the more fun courses to play around Phoenix.

The views from the golf course at The Phoenician are spectacular.

The par-71 course traverses the east and south slopes of Camelback Mountain and it plays harder and tighter than its 4,594- to 6518-yard length would let on.

The Phoenician was previously a 27-hole facility but critics felt too much was being jammed into too small a space. Architect Phil Smith rerouted the course to find the best 18 holes and worked from there. Especially challenging, he told a group of golf writers not long after the renovation, was handling the drainage from the rocky slopes of one of Phoenix’s landmark mountains.

In March, a midweek round at the Phoenician will set you back between $189 and $229.The viuews area among some of the best in Phoenix area golf.