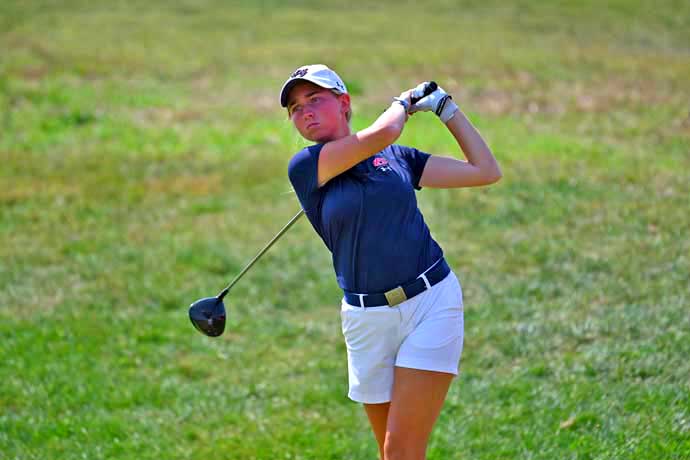 Plus: University of South Alabama Men Wrap Up Fall Season

The Auburn University women’s golf team rode a final-round 4-under 284 Wednesday to finish in third place in the Ally at Old Waverly Club in West Point, Miss.

Auburn’s cross-state rival Alabama finished in eighth place at 10-over 874.

Junior Mychael O’Berry led Auburn’s rise up the leaderboard by making six birdies on the first nine and tying her career low with a 68. O’Berry finished tied for 22nd in the final standings

“The ‘best day for last day’ came to fruition,” Auburn head coach Melissa Luellen told AuburnTigers.com. “What a solid showing by Elina. I am very impressed with her stoic mindset. I am pleased with the grit from all our players for digging deep for every shot. These girls love ‘team golf.’ It was a fun day on the course.”

Megan Schofill closed with a 71 to finish at 1-over. The returning freshman, who was making her season debut this week, was second on the team and tied for 16th overall. She’s now finished top 20 in six of the eight tournaments she’s played in at Auburn.

Junior Kaleigh Telfer and freshman Anna Foster both finished inside the top 40 individually. Telfer closed out with a 73 (+1) in the third round while Foster carded a 75 (+3). Foster, playing in her first collegiate tournament, was third on the team with nine total birdies.

Auburn’s 284 in the third round was matched only by South Carolina, the tournament champion.

South Carolina’s Pauline Roussin-Bouchard (71-66-65) won the individual crown after turning in a three-day total score of 14-under par 202.

Team Standings in the Ally at Old Waverly

Jordan Plunkett paced the University of South Alabama men’s golf team as it concluded play this fall at the Little Rock Invitational.

The junior fired a 4-under-par 68 in the second of three rounds at the event, posting a 217 54-hole score to tie for 28th place in the individual standings.  Eli Mitchell, Kyle Robinson and Yannick Schütz each added a round at or below par at the tournament as the Jaguars placed 11th as a team with an 877 total over the two days.

Little Rock — the tournament host — recorded a 35-under-par 829 group score to win the event by a 17-stroke margin over runner-up Arkansas State.  ULM’s Guillaume Fanonnel was the medalist after carding a two-day 10-under-par 206 total.

South Alabama coach Ben Hannan said he hopes the Jaguars can find consistency as they look to the spring season.

“There were some good signs throughout the fall and we need to build on that,: he said.

“We have a talented team with depth, but we need to start having all nine guys play to their ability consistently — that starts at home — where we need to play to a level that pushes everybody.  Because of COVID-19 and the shortened fall season, we’ll get to work right away looking to improve individual things with each guy as we prepare for the start of the spring in February.”