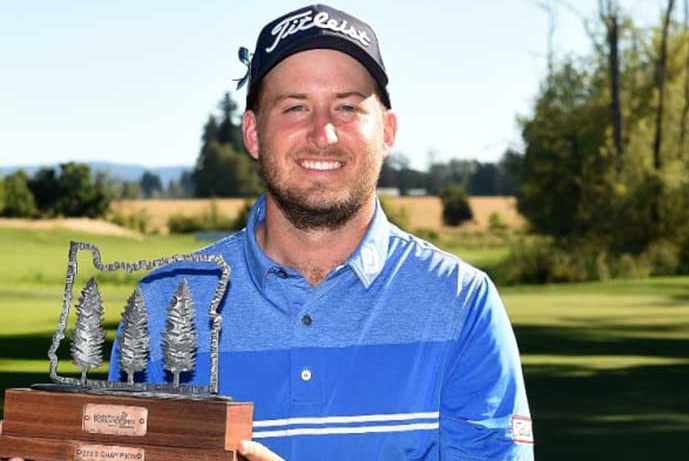 Hodges birdied the final hole to take a two-shot victory in the Portland Open, a Korn Ferry Tour event.  Hodges finished at 11-under-par 273 to edge four players who finished at 9-under 275.

With the win, Hodges earned a berth in the upcoming U.S. Open to be played Sept. 14-20 at Winged Foot Golf Club in Mamaroneck, N.Y. The Portland win means Hodges rocketed up to No. 3 in the Korn Ferry Tour points standings.

He joined former Florence resident Stewart Cink as one of only two players from North Alabama to win on the Korn Ferry Tour. Cink, who now lives in Duluth, Ga., won three times in 1996 on what was then the Nike Tour.

Hodges began his college career at Alabama-Birmingham and then transferred to the University of Alabama for his final season of eligibility.

Hodges grew up playing in Ardmore in Northeast Alabama in an area where local golf courses include Southern Gayles Golf Club in Athens, Alabama, Canebrake Golf Club also in Athens, and Point Mallard Golf Course in nearby Decatur, Alabama.

Hodges became emotional when asked about the meaning of the victory.

Hodges shot rounds of 70-64-68-71 for the win. With no leaderboards on the course, he said he didn’t know he was leading until the final hole.

“The last hole was the first time I knew where I was,” he said. “One of the rules officials told me I was the only one at 10 (under) and everybody else was at nine. I was just trying to make a five. It was nice to make a four.”

Hodges hit a perfect drive on the last hole and then blasted a 4-iron to within 15 yards of the green. He played a pitch on the par 5 to about four feet from the hole, then calmly rolled in the birdie to make it a two-shot win.

Hodges said he fought his swing throughout the final round. His key hole, though, came on No. 14 when his approach flew into a penalty area behind the green. But he managed to get it up and down to save a bogey to maintain his lead.

“Fourteen was the biggest hole I have had in my life, maybe,” he said. “It was the best swing I made all day out of the fairway. We thought it was kind of playing into the wind a little and obviously it wasn’t. I kept fighting all day, I kind of kept my composure to be honest with you. I didn’t have my best stuff today – my ball striking wasn’t there. I hit a lot of good lag putts; a lot of good two-putts. “

At No. 3 on the Korn Ferry Tour points list, Lee Hodges is positioned to earn his PGA Tour card for next season. The top 25 finishers earn playing privileges on the PGA Tour. He can also savor playing in his first U.S. Open Championship next month.

“That’s pretty sweet,” he said. “I’ve never played in a major. It will be nice to get to.”

Have golf course you’d like us to review, a story idea or a news item to report? Email bamagolfnews@gmail.com.