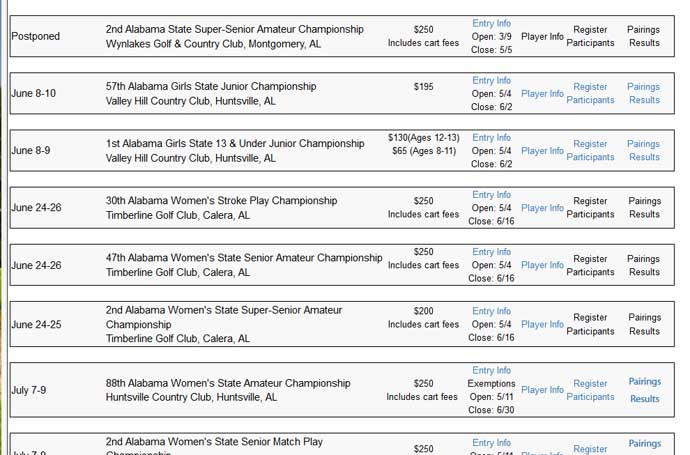 No Carts or Caddies at First, Walking Only

The Alabama Golf Association has revised its summer championship schedule and implemented safety measures to protect competitors, volunteers, staff and spectators from COVID-19.

Based on the latest “phased re-opening” recommendations from state and federal officials while still following social distancing and sanitation guidelines, the Alabama Golf Association will implement a similar approach for AGA competitions this summer, it said.

The phased approach will be subject to change, the AGA said.

A four-phase program has been developed that begins with “Phase 1,” and the next event will conducted under “Phase 2” rules, if conditions warrant and so on until “Phase 4” is reached – which the AGA said will be the new normal.

The four event phases will be:

The 104th Alabama State Amateur Championship, originally scheduled, for June 10-13 has been postponed until July 29-August 1 at Saugahatchee Country Club in Auburn.

Due to this date change, the Alabama State Match Play and Senior Match Play Championships at the Auburn University Club from July 30-August 2 have been  canceled, the AGA said.

State Amateur sectional qualifying is canceled with full refunds provided to those entrants. Exempt players already registered remain in the championship field. Updated State Amateur registration form, exemptions and field selection process will be available by the new registration opening date of May 11.

*Registration opens on May 4

*Registration opens on May 4

*Registration opens on May 11

*Registration opens on May 18

*Registration opens on May 18

*Registration opens on May 11

The dates for remaining AGA championships in the fall remain as scheduled.

AGA said it is exploring options to reschedule the Alabama State Senior Amateur, State Super-Senior Amateur and State Four-Ball Championships in the fall and early winter.