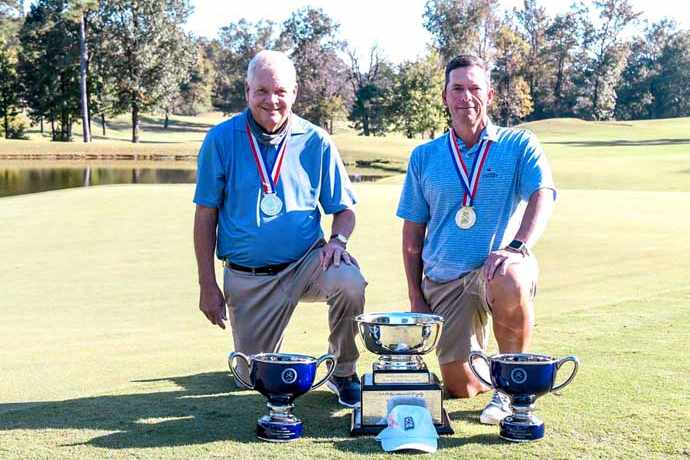 The Vaughan-Pritchett team fired a 10-under 61 in the final round of the tournament to secure the win.

Pritchett had the two biggest shots of the Senior Four Ball. His albatross on No. 8 and eagle on No. 15 extended their lead and helped them break away from what had been a four-way tie for the lead.

Pritchett and Vaughan finished with at 22-under 191 to win by five shots. Their final-round 61 was the best round of the tournament by three shots and their winning score was a tournament record by one shot.

“I’m really fortunate to have such a great partner in Emile, who brought me up all day,” Pritchett told the Alabama Golf Association after the win. “I’ve never made an albatross before, so I can’t say that anymore!”

Claud Cooper of Birmingham and Richard Jeffers of Mobile finished in second place in the Senior Four Ball with a 7-under 64 in the final round and a total of 17-under 196.

Birmingham’s Al Delgreco and Mike Greer closed with a 5-under 66 and  were third at 15-under 198.

Vaughan and Pritchett slept on the second-round lead after starting the tournament with rounds of 66-64.

“My partner played extraordinarily well all day,” Dougherty told the AGA. “He didn’t have a bogey all day, and we kind of nursed our lead all day long with that.”

Chip Woddail and Hamp Andrews of Daphne shot 7-under 64 to close. They carded an overall 18-under 195 to finish second.

Winning the scorecard playoff for third place, Tom Davis and Tom Jungkind of Hoover shot 7-under for the day. Overall, they went 16-under at 197.