The Golfers Book of Wit Wisdom 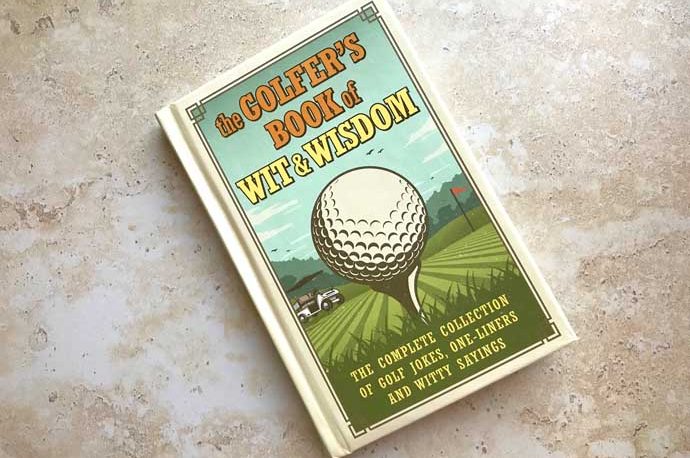 A Compendium of Golf Jokes and Witticisms

“The Golfers Book of Wit & Wisdom” is the kind of quirky little book that comes along that you have to have. Maybe on your desk when you need a break. Maybe by the loo, too.

Billing itself as “The Complete Collection of Golf Jokes, One-Liners and Witty Sayings,” the book ($12.50, hardback,  (Penguin/Random House) pretty much lives up to the name.

About the size of the 2019 edition of the “Rules of Golf” you’ll find around the golf shop or lockerroom, “The Golfer’s Book of Wit & Wisdom” weighs in at 137 pages. With an average if three mostly one-liners per page, that’s more than 400 golf jokes, cliches, witticisms and truisms.

So, with that said, we’re off:

“The only putting advice I ever got from my caddie was to keep the ball low.” Chi Chi Rodriguez

“I was summoned to appear before the golf club committee for playing off the ladies’ tees. I explained I was playing my third shot.” Bing Crosby

“If you come in second you’re just the first loser.” Tiger Woods

“Don’t play too much golf. Two rounds a day is plenty.” Harry Vardon

“The easiest shot in golf is the fourth putt.” Ring Lardner

“Nobody asked how you looked, just what you shot.” Sam Snead

“Hit the ball up to the hole. You meet a better class of person there.” Ben Hogan

“I’m using a new putter because the old one didn’t float too well.” Craig Stadler

“If you drink, don’t drive. Don’t even putt.” Dean Martin

“Real golfers, whatever the provocation, never strike a caddie with a driver. A sand wedge is far more effective.” Brian Barnes

“After shooting over 200 I asked my partner what I should give my caddie, He replied, ‘Your golf clubs.'” Jackie Gleason

“It’s not good sportsmanship to pick up lost balls while they are still rolling.” Mark Twain

“Never break your putter and your driver in the same round or you’re dead.” Tommy Bolt