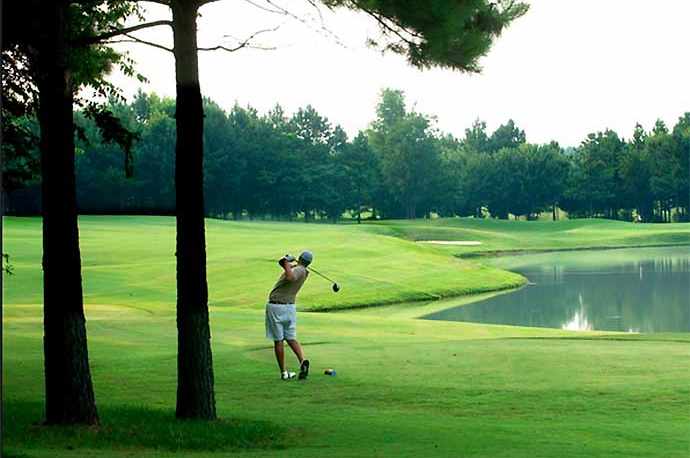 Ol’ Colony: Some of the Best Golf in Western Alabama

What makes this 18-hole, city-owned course so good? Let’s count the ways.

Built for $5 million, Pate used the natural lay of the land to craft a playable, yet challenging course. The topography features some natural elevation changes, more than 70 bunkers, and water – all 25 acres of it – comes into play on numerous holes.

Golf Digest Called Ol’ Colony One of the Best Munis in the U.S.

The entire complex is spread over some 597 acres that once was a tree farm for a mental institution named Boy’s Colony.

The course opened to great fanfare in December 2000. Golf Digest architecture editor Ron Whitten dubbed Ol’ Colony one of the best munis in the country. Ol’ Colony was ranked No. 5 on the magazine’s Top New Courses list in 2001 and consistently is ranked among the Top 10 best courses in Alabama.

John Gray, Ol’ Colony’s director of golf since 2004, said numerous changes have been made since the course first opened. A greens renovation project in 2013 included installation of the popular Miniverde Bermuda greens that are slick with some subtle and not-so-subtle undulations. Get on the wrong side of the hole and good luck trying to two-putt. Tees and greens are also Bermuda grass.

The course underwent two rounds of tree removal (2016, 2018) that has made Ol’ Colony visually more appealing.

As home to the Alabama golf team, length has been added Ol’ Colony. It’s listed yardage from the crimson tees is 7,544 yards, but there is room to stretch it even further. In 2016, Ol’ Colony hosted an NCAA Men’s Regional.

Tuscaloosa Muni Golf at its Best

Like most designers, Pate included one risk-reward drivable par 4, and it comes early in the round at No. 2. It plays a scant 318 yards from the crimson tees, but it is all uphill. And any shot that ends up over the green or beyond the pin results in a nasty downhill shot or putt that is almost impossible to stop on the green. In fact, Gray said No. 2 was the highest-scoring hole in the 2016 NCAA Men’s Regional.

“I think the two best holes are 17 and 18. No. 18 would be first because as finishing holes go, it requires a precise tee shot to set up the iron into a severely sloped green with many options for a final day flag. The water surrounding the right side of the hole also helps to put fear in the player’s heart when needing a birdie or even a par.

“No. 17 was originally designed with a 75-100-year-old oak tree guarding the right side of the green. The tree was damaged in construction when building the bunker and we lost it in 2003 and have replaced it with a smaller oak. But the original hole required a cut shot to get to a right-side flag. The green is also set off center which makes it difficult to line up on the hole and gives you the effect of hitting to a narrow green which bring s the left bunker in play.”

This and that: Ol’ colony features a full practice facility and a grill. Weekday rates are $49 and weekend rates are $59, including cart fee. There are a variety of membership options available…. Gray said the course has rebounded nicely after shutting down early in the coronavirus pandemic. Ol’ colony did 4,500 rounds in August and is on pace to get close to the 32,000 rounds it averages per year, Gray said…. For more about Ol’ Colony, visit here.