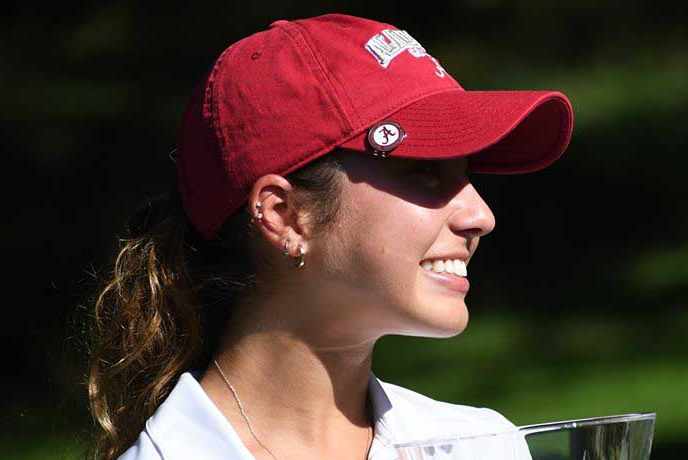 Heading to University of Alabama

On a day that figured to be all about the Big Orange, it was a University of Alabama golfer who turned the tide late in the Golf Capital of Tennessee Womens Open.

Incoming Alabama freshman Michaela Morard used an eagle on No. 8 at Stonehenge Golf Club to make her move in the rain-shortened final round and went on to claim a one-stroke victory in the 22nd renewal of the Tennessee Open, which is open to both professionals and amateurs.

“This is special, being my first professional event,” said the 18-year-old Morard, who just missed out on being the youngest player to ever win the event by one month.

“This was a great opportunity, being three hours away from my house.  My experience here (in Crossville) was great. Everywhere I went, I saw a smile on everyone’s face. The course was in great shape.  It was just a really good week.”

Morard, a recent graduate of Huntsville’s Randolph High School, is no stranger to winning.  She claimed the Alabama Girls’ Junior Amateur a record five times and also won the 2019 Alabama Womens Amateur Championship.

She got off to a slow start at the Tennessee Womens Open on Thursday with an opening-round 75, but bounced back with a 67 in the second round.

Still, she entered the last day of the tournament four strokes back of leader Micheala Williams, who played her high school golf at Athens (Alabama) High School, and her hopes of victory got even more slim when the final round was cut to nine holes after a lengthy weather delay Saturday morning.

“I shot 32 on the front nine in the second round, so I knew I had it in me,” Morard said.  “When my dad and I were riding up to the first tee (for the final nine), we were like, ‘Okay, we’re flag hunting today’.”

In the final group, Williams – a senior at the University of Tennessee – was at 6-under overall, one stroke ahead of recent Lady Vols commitment Kynadie Adams of Gallatin, Tenn.  They were joined by University of Kansas product Sera Tadokoro, who sat at -4-under after two days.

Adams took the early upper-hand in the dash to the finish as she parred the opening hole of the nine-hole finale while Williams double-bogeyed it.

Adams maintained the one-stroke advantage over Williams the rest of the way after they swapped birdies (Williams on No. 2 and Adams on 3).

But what neither of them saw coming was Morard from back in the pack.  A birdie on No. 2 got the Huntsville native started early, but four straight pars after that left her needing to make up some strokes quickly as she still sat three strokes behind Adams at 3-under.

She got one of those with a birdie on No. 7, and then on the following hole the big swing happened. Morard eagled the short par-five, No. 8 for the second day in a row, while Adams suffered a bogey out of the green-side bunker.

That swing moved Morard to the top of the leaderboard at 6-under and left Adams one stroke back.  They both parred the final hole, No. 9.

“Normally, I do want to know where I’m at (on the leaderboard),” Morard said.  “But since it was only nine holes and I had to be super aggressive, I was just like, ‘I’m just going to play my game.”

“Since I started the day in fifth place, I was just going to go as low as I could and whatever happens happens.  I actually didn’t know where I was until the last hole, and I was like, ‘Oh, I need a two-putt’.”

Morard came to the Golf Capital of Tennessee Womens Open just looking for tournament reps after a spring that saw her not play much golf due to injuries and the COVID-19 pandemic.

She’s been fighting back issues, and then over Christmas break she suffered a fall down some steps which left her with a sprained wrist and tendinitis.

She didn’t swing a golf club for almost eight months and had only played in one other big event coming into this week in Crossville – the North & South Women’s Amateur at Pinehurst the week before.

“I think it was good for me,” Morard said.  “A little reset button.”

“I came here looking for tournament reps.  I’ve been practicing a lot, but practicing and playing are a lot different.”

Williams ended up third at 4-under, followed by Kailie Vongsaga of Diamond Bar, Calif., Tia Teiniketo of Homewood, Ala., and Tadokoro.

The top finishing professional in the event was Elizabeth Nagel of DeWitt, Mich. Her seventh-place finish was good enough to collect her the top professional prize of $5,000.

She was the only pro to finish in the top 18.  Defending champion Ashli Bunch and Chattanooga native Jordan Britt – both professionals – were in a large group to finish T19.

Rounding out the top ten were day one leader Shelly Chen and Carthage, Tenn. 16-year-old Sophie Linder at –under, and then another in-state junior standout, Lynn Lim at even par.

By the Tennessee Golf Association

Have a story idea or a news item for Alabama Golf News to report? Email bamagolfnews@gmail.com.