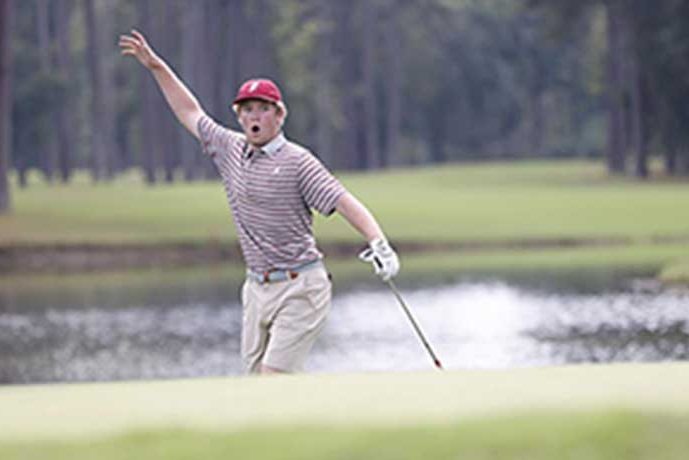 BIRMINGHAM – Alabama’s Jones Free chipped-in for birdie on the 18th hole to secure a 1-up victory and the clinching point in the Crimson Tide’s 3-2 win over Ole Miss in Tuesday’s final round of SEC Match Play hosted by Jerry Pate.

With the win, Alabama finished the four matches over three days with a 3-1 record which included three consecutive victories to close tournament action.
Arkansas defeated Vanderbilt 3-2 in the championship match to claim the tournament trophy.
Auburn finished the tournament with a 2-2 record.
Jones Free squared off against Ole Miss’ Evan Brown in a back-and-forth affair that featured both golfers holding as much as a two-hole lead. The Selma native held a 2-up advantage through 13 holes before Brown won 14 and 15 to draw even, setting up Free’s heroics.
Canon Claycomb and JP Cave also won their matches to earn the Tide’s three points in the victory.
In addition to the win over the Rebels, Alabama defeated Florida 3-2 in the second round and South Carolina 4-1 in the third round. The Tide’s lone loss came in the first round to LSU (3-1-1)
Jones Free’s chip-in sealed the win and give the Tide freshman a 2-2 overall record across his four matches
Cave closed out his third straight head-to-head victory with a 3&2 win over Jackson Suber to finish the week at 3-1.
Claycomb recorded the Tide’s third point vs. the Rebels with his 3&2 victory over Brett Schell, and finished with a 2-2 record.
In the other two matches vs. Ole Miss, Tyler Lipscomb fell to Kyle Meeks 4&2, while Thomas Ponder fell to Sarut Vongchaisit.

The Crimson Tide was one of three teams to finish with three victories. The others were Georgia and Vanderbilt. The Razorbacks went 4-0.

Junior Alex Vogelsong and Carson Bacha secured the first two Tiger points Monday evening, winning before the round was called due to darkness. Sophomore J.M. Butler bested Pedro Cruz Silva, 3&1, for the third Auburn point before junior C.J. Easley took down Hunter Logan, 1-UP, to snag the fourth.

Austin Coggin tied Mississippi State’s Ford Clegg as the two tied the contest after 18 holes. In Tuesday’s sequel, the Auburn men claimed yet another triumph, this time over the Kentucky Wildcats, 3-1-1. Easley notched another win, downing UK’s Campbell Kremer, 2-up.

Butler and Coggin also came in the clutch with wins over Cooper Parks and Hugo Archer, respectively, to put the match away. Butler won 5&4 while Coggin claimed his win 4&2. Vogelsong concluded play against Jacob Cook in a tie and Bacha fell late to Zach Norris, 2&1, the only blemish on the Tigers’ Tuesday resumé.

Throughout the event, each Tiger collected two wins apiece as Coggin, Easley and Vogelsong all went 2-1-1 to lead the squad, individually. Bacha and Butler both racked up 2-2 records.